Thursday, around 6:23 PM. I heard some sirens while walking down Miller Street and noticed that something was going on at the intersection of Margaret and Elm streets. 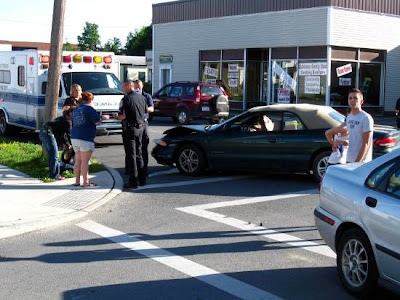 I ended up near some bystanders checking out the scene. Two cars were bashed but it seemed no one was seriously injured. Off the street near the sidewalk there was a baby in a child safety seat, not crying. Next to the child seat a woman was being interviewed by a police officer. I stayed out of the way and didn't get any details about what had happened. (Sometimes the Plattsburgh PD acts as if it's illegal for me to keep back and take a few shots with my camera.) 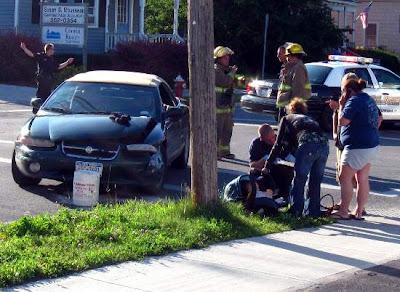 One bystander said there had been more accidents at that intersection since the city took out the stoplight. He said a few people were used to the stoplight and would forget it was no longer there.

Some time ago the city in its infinite wisdom replaced the stoplight with stop signs only for the Elm Street traffic. During the busy times I had seen how people on Elm Street would get stuck, waiting for an open spot in the Margaret Street traffic. The worse time was in the afternoon when Oak Street School was in session, the school buses and cars with parents picking up their kids.

Also, no stoplight made it a bit trickier for anyone traveling on foot. And without a stoplight people who enjoyed speeding had a straight shot down Margaret Street, especially with the school zone.

The bystander made a comment that the city was trying to save money by taking out the stoplight.

If it's true that more accidents are happening at Margaret and Elm, then the city is losing money every time police cars, ambulances, and fire trucks are sent to the scene.

Time to undo the mistake. Replace the stoplight before someone is killed.

I agree, that is a dangerous intersection. Traffic to and from Post Office, plus School Zone nearby.

There is little to no enforcement of "Full Stops" or speed on Margaret. Great shots.

With the warmer weather I leave my windows open most of the time so I can enjoy even more the sounds of idiots on crotch rocket motorcycles tearing down Margaret Street.