I called a while ago and so far no action by the city. OK, I know Public Works Department is stretched thin and can’t cover everything ASAP. But after so many empty promises, cynicism starts to kick in; there’s the feeling that the scofflaws will skate through another winter without any repercussions. Most property owners are doing their part but a few just don’t get it. 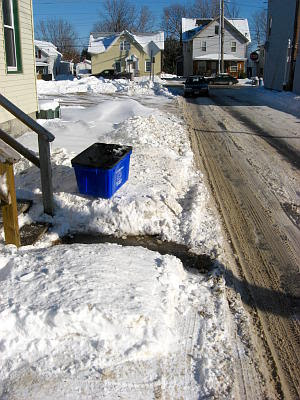 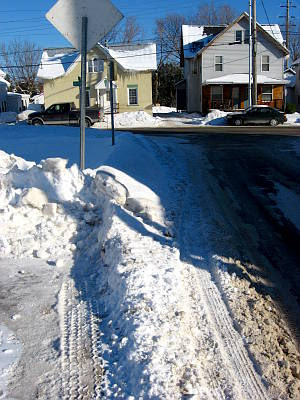 Three storms and this section on Elm Street is still clogged, except for the driveways and sidewalks leading into each building. Elm is a narrow street, just enough room for two cars traveling in opposite directions to pass each other. Drivers don’t need a pedestrian in the road.

Apparently the city’s new law has been approved by the NY Department of State and so scofflaws will be billed on their taxes for snow removal. (I mean, if there was a snag with NYS, we would know about it, right?)

Of course, the issue about senior citizens and the disabled being unable to shovel is an issue, but one that is being addressed, in part with volunteers. Anyway, raising money by getting scofflaws this way sure beats towing vehicles on New Year’s Eve because of the after midnight parking ban during a snow storm.

And speaking of scofflaws… 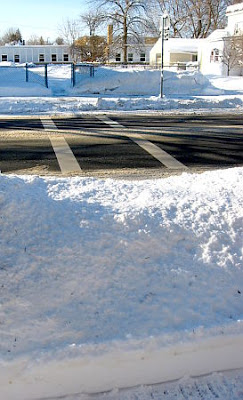 With school starting up soon, will the city ever clear this part of its crosswalk on Margaret Street? Or does it want the kids to walk in the street or scale the snow bank?