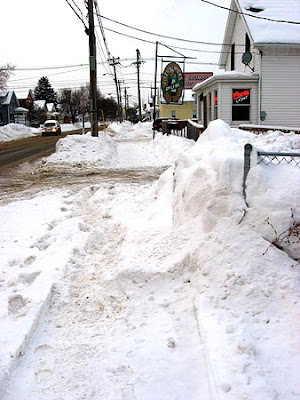 The other night I noticed that a front-end loader was working on the Press-Republican parking lot. At one point it left the lot, traveled a bit down Margaret Street, and started to remove part of snow pile that had been blocking the sidewalk near the bar next door.

The pile had been there for a while. It sat on the borderline of Fitzpatrick’s Bar and the PR property. You either had to climb over it – about five feet of snow – or walk in the street. I couldn’t tell who made the obstruction. Maybe it was the person who plowed out Fitzpatrick’s. Or maybe it was the person employed by the newspaper. Or maybe both snow removers contributed to the problem.

At least the front-end loader from the PR cut down the bank. But as you can see from the above image, there’s still some snow left to go. So who’s responsible?

How is the city going to handle a boundary dispute? One property owner could say that the guy next day pushed the snow onto his land. And the other guy could say all he did was push snow back that had been shoved onto his property.

Well, if such a dispute arises, I don’t effing care. I don’t want to walk in the street or climb over a hill of snow. Just remove the damn barrier.