Until recently the west end of Bridge Street was two-way, allowing traffic to flow in both directions. This was working, especially for travelers on Margaret Street who wanted to turn down Bridge Street.

Of course, you know what that means. You can’t have convenience and logic. It’s got to be screwed up. 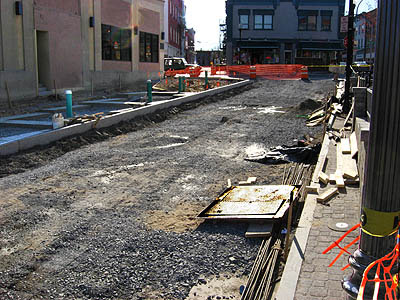 With the recent construction the west end of Bridge Street has been narrowed down to one lane. Apparently the plan is have traffic go one-way only, spilling out to Margaret Street.

There’s a surfeit of one-way streets downtown. What adds to the confusion are streets like Brinkerhoff and Court that switch from two-way to one-way after one block.

Also, the new construction is putting in more terraced seating. For what? There’s no restaurant on that corner. Very few use the terraced seating already built on the other side of the street. And with the narrower street, more parking has been eliminated. Once again the Plattsburgh Department of Waste Management has gone ahead with another unneeded project. (The Dept. of Waste Management makes sure that taxpayer dollars are completely wasted.)

Years ago the city screwed up main street by narrowing it and making it one-way. This made it easy to give directions to the mall outside the city. (“Go down one block and make a right.”) Margaret was eventually changed back to a two-way street but it remains too narrow in places.

Downtown Plattsburgh needs a better traffic flow and more, not less, parking. Prediction: wait twenty years and this terraced seating crap will fall apart. Then it will be torn up so that parking and a two-way flow will be re-established. 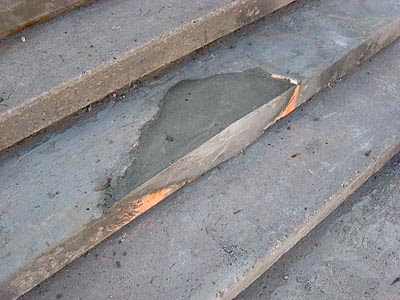 Meanwhile, at the Downtown Baghdad Public Library, more patchwork shit has been slapped down. I heard a rumor that bids are out to permanently fix the steps. Of course, the Bridge Street terraced seating will be completed long before the library entrance is fixed. Basic infrastructure ignored while pipe dreams are given the green light.