That night in October 2019 Jonathan Mackenzie Parker was delivering pizza as usual when -- as he explains -- BAM!

He had the right of way at the intersection of Clinton and Marion streets. Without warning -- no flashing lights or siren -- a Plattsburgh Police Department car shot through, ignoring the stop sign, totaling Jonathan's car.

The incident was recorded by a dashcam camera in a car parked down the street. The accompanying video shows the violent impact.


The police officers were responding to the report of someone on the loose with a knife. According to Jonathan both officers were taken away by ambulance. The photos below show the extensive damage to his car. 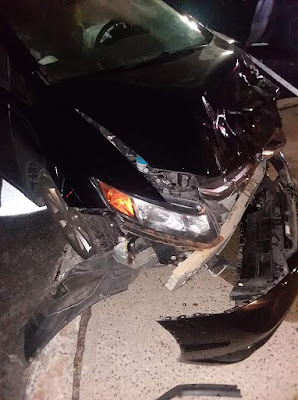 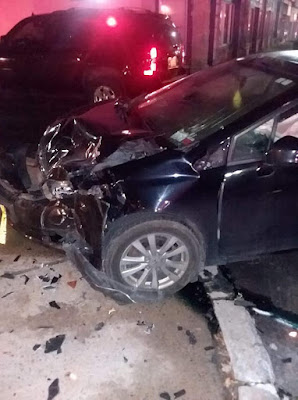 The Plattsburgh PD told Jonathan that the police officer was at fault and that he would be compensated by the department's insurance company. He says the police report and the investigating officer stated the police driver who ran into him was at fault.

In a Press-Republican newspaper article  about the crash dated Oct 28, 2019 Police Chief Levi Ritter was quoted: "They proceeded through an intersection (with Clinton Street) as carefully as possible, but collided with another vehicle... There’s no good way to say this; the officer was at fault.”

So Jonathan thought he would be reimbursed. Working 60 hours a week at Pizza Bono meant his car provided a source of income. He says he was without a car for a week until he was able to purchase another vehicle to get back to work.

Jonathan: "I had to drop all my savings on a new [car] and it put me behind on my rent and other bills."

But the insurance money would help him out -- or so he thought.

The insurance company for the Plattsburgh PD refuses to pay out. In a letter sent to Jonathan the company stated:

"Tokio Marine HCC - Public Risk Group insures claims on the behalf of US Specialty Insurance Company (USSIC) and The Tokio HCC Public Risk Program through which the City of Plattsburgh, NY is insured. We have received notice of your above-referenced claim seeking recovery of property damage arising out of a motor vehicle accident that occurred on or about the above stated date of loss...

"Our investigation has revealed the underlying the Claim occurred during the course of a call by our insured police vehicle, and therefore, the City of Plattsburgh is entitled to governmental immunity in this matter... Our investigation found no evidence to suggested the alleged actions of the operator of the police vehicle would meet the 'reckless disregard' standard."

No siren, no flashing lights, running a stop sign. No reckless disregard?

Jonathan: "I'm kinda low on options [to deal with the insurance company denial.] To be honest this whole thing has been pretty demoralizing. Like all I did was drive straight down the street and then all of a sudden my life is turned upside down. It's been all my responsibility to get all this done. I'm the one making all the calls, filling out paperwork and doing all the work. And it's just so unfair."

Here are previous articles I've written about Plattsburgh PD cars speeding along without sirens on.

Officer was going faster than 30 to cause that kind of damage. And collided, more like smashed into. Good thing it wasnt Jonathan or he would be in anworld.of shit. Just my personal opinion.

...and it's also the police who are responsible for enforcing traffic safety laws, right?
Let's see ....if one witnesses someone driving dangerously or recklessly they will have to rely on a group of other reckless drivers to address the situation ...

Need an attorney not from here.Lawsuits both criminal and civil. Use the evidence the police have to win the case. It's a no brainer.

If you read the article carefully you will see that the police department took full responsibility for it, the officer admitted fault, and they are not trying to get away with anything or covering anything up - The press republican article about this said that the officer will be facing disciplinary actions. So yes, if you ran a stop sign you would be punished- this officer is also going to be punished, so there’s no special treatment happening here.
The issue is that the insurance company has chosen not to pay and that’s not a decision that the police department had anything to do with. If you’re looking to blame someone for the non-payment then blame the insurance company not the P D who has been upfront about everything.