Rounding Up The Unusual Suspects 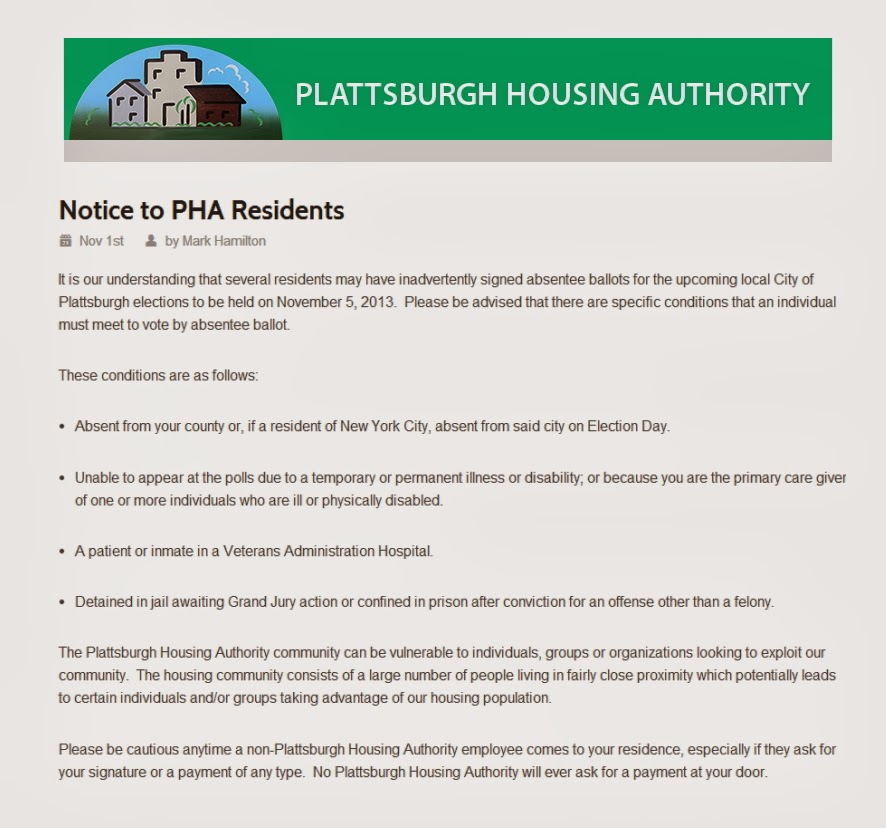 "Round up the usual suspects." - Inspector Renault, Casablanca, 1942 film


November 15, 2013.  City of Plattsburgh (COP) police officers knocked on some doors and hauled in some suspects.  Drug dealers?  Terrorists?

No, just ordinary citizens, voters, and even a mayoral candidate.

Election season.  Republican candidates charged that fraud was being committed with absentee ballots canvassed by the Working Families Party (WFP).  Martin Mannix, Clinton County Democratic Party Chairman, responded in a news conference that the primary intent behind the charges was to intimidate voters in the Plattsburgh area (city and township).

Absentee ballot voters in the Town of Plattsburgh (TOP) were subpoenaed to testify in NYS Supreme Court about the matter as discussed in my previous article, "Allegations Uninvestigated After Judge's Final Decision."

Meanwhile Plattsburgh City police also looked into the matter within the COP domain.  Part of the investigation focused on absentee ballots collected from residents in the low income housing operated by the Plattsburgh Housing Authority (PHA).

The COP police station was busy, various people being interviewed in the cubicles.

Even a mayoral candidate, Mark Tiffer, a Democrat also endorsed by WFP, was brought in for questioning.  He was interviewed about what he knew which was basically nothing.  Fortunately, he wasn't subjected to the interrogation style of the good old days of policing, a bright hot lamp burning into his eyes in a darkened room, sweat-miasma hanging in the air.

Of course the Plattsburgh City police were only following orders that came from the top.  And at the top at this time was Mayor Donald Kasprzak, a Republican, a detail rightly or wrongly emphasized by those opposed to his political POV.

Besides the police investigation the Plattsburgh Housing Authority (PHA) put up notices on doors throughout the low income housing area and also posted the notification on its website.  The notification alerted residents to be on guard from people canvassing absentee ballots, that dire legal consequences could result if the voter didn't properly fill out the form.  One wonders if this warning would have been issued if the Republican Party, not WFP, was gathering absentee votes.

The results of the investigation have not been publicly revealed.  Until such results are shared it's uncertain if anyone was guilty of fraud.

WFP member William Cowan was interrogated at his home by two police detectives.  William wanted to know who initiated the investigation and was told to speak with Lieutenant Rascoe.  William called the PD, left a message for a return call, but there was no response.

One take on the investigation is that the police offers didn't have warrants, ergo, the people interviewed didn't have to comply to the extent they did, being interrogated at the police station.  But a cop at your door can be unsettling, especially when you're caught off guard.  One WFP member knew her rights: she shut the door on the police when they tried to haul her down to the station to be interrogated.

So was the COP investigation into the absentee ballots mainly an act of intimidation?

Mark Tiffer didn't win the mayor's seat.  A third candidate entered the race who took a large number of votes away from him, a three way split that allowed Republican James Calnon to gain the majority.  There's always another election but lingering in the background is the story about Mark being interviewed by the police regarding absentee ballot fraud.  And even though he did nothing wrong, some won't get the full story and negative rumors could spread.

And as for those absentee voters targeted by both the COP and TOP investigations?

WFP members heard a certain comment more than once:

Sources include an article by William Cowan to be published in the upcoming first edition of the alternative newspaper, UnderCurrents.

While checking out various details I tried contacting a potential source but that person's phone has been disconnected.  From what I heard that individual wants to forget about any involvement with the absentee ballot canvassing.  A situation that could be construed as another example of intimidation.