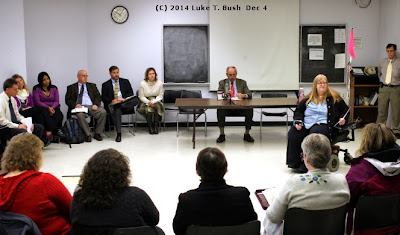 Some problems have arisen with recent changes with Medicaid client transportation services to medical appointments in the Clinton-Essex-Franklin region.  To address these and other issues an advocate for the disabled, Debra Buell, organized and moderated a meeting held Wednesday morning, December 4th, at the Clinton County Government Center.

The following is part of a series covering different aspects of that meeting.


Helping others is important but a provider has his limits, especially when giving assistance negatively impacts his own situation.

Ride vendors from Franklin County who use their own personal passenger cars said they have seen a drastic drop in reimbursement since the State takeover of Medicaid transportation scheduling.

The transport providers stressed how important their service was to Medicaid enrollees.  But expenses were making it difficult to continue that service.

Ride vendor John Bashaw talked about one of his riders, a kidney dialysis patient who does have a driver's license and car but doesn't feel well enough to drive after treatment.

When John takes the client to treatment the total mileage is approximately 32 miles.

"I've been doing [this] for two years but I can't do it on a gallon of gas and make two dollars for the day when I'm tied up for five hours."  Responding to a question by moderator Debra Buell regarding the level of reimbursement, he said Medicaid only paid him $7.00 for the whole day.

"I'm scared for him," said John, referring the possibility of the kidney dialysis patient being forced to drive himself back home after treatment.

Another private Medicaid ride vendor from Franklin County, Terry Collom, commented on his problems with the reimbursement cut.  Also using his own personal vehicle, he said in some cases he wasn't even getting a quarter of the amount he received before the Medicaid takeover. For a trip to Albany, he received $248.00 in the past, now the reimbursement was down to $136.00 . For a shorter trip of 90 miles total he was only receiving $15.00 .

Another problem was the long delays with reimbursement.  It was over a month before he was paid for $800 worth of gas. "I'm on a fixed income," he said.


Terry also mentioned the issue of "deadhead miles" or "unloaded rides," a situation in which the rider only needs transportation one way to a medical appointment and Medicaid only reimburses for half of the trip with the client on board.

Heidi Seney from NYSDOH (New York State Department of Health) said that she had received input on that problem and that the issue was resolved that day.  Drivers would be paid for both legs of the trips.

When I spoke with the ride vendors later they told me that private drivers were dropping out of the program because they couldn't afford the low reimbursement rates.

Obviously in a vast rural area like the North County these drivers are vitally needed.  They can only sacrifice so much in helping others, especially when they are using their own personal vehicles, the wear and tear on their cars from driving so many miles, especially on back roads.  They don't want to abandon Medicaid enrollees who need their services, especially those with serious medical conditions.

The drivers are torn between helping and the need to handle their own budgets.
Posted by Luke T. Bush at 4:29 AM