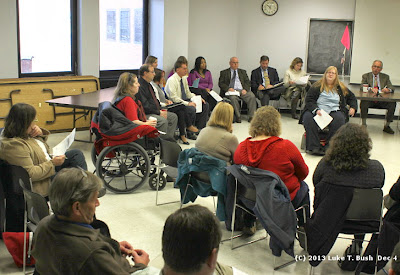 Some problems have arisen with recent changes with Medicaid client transportation services to medical appointments in the Clinton-Essex-Franklin region.  To address these and other issues an advocate for the disabled, Debra Buell, organized and moderated a meeting held Wednesday morning, December 4th, at the Clinton County Government Center.

The following is part of a series covering different aspects of that meeting.

If you have a problem, tell us.

That was one of the main points addressed to community service agencies, ride vendors, and Medicaid clients by MAS and NYSDOH.

At the same time the right person had to be contacted about an issue.

"I want to make it clear that Medicaid transportation in Clinton County is a Department of health program in New York State," he said, explaining that his department had a contract with Medical Answering Services in Clinton County.


He continued to explain that contractors such as MAS have to follow the direction and rules of his department and that the goal was to improve service.

"Any issues with [MAS] you actually have issues with the Department of Health, and that's where you should be directing your concerns."

During the meeting he noted that some problems fell under the responsibility of his department while others pertained only to Clinton County.  His responsibility was handling issues with Medicaid enrollees using public transportation and private vendors.

(That's one difficulty I've had tracking the various aspects of this story: different consumers/clients and different services/programs that at times overlap.  I could see how client could get confused, contacting the wrong department or person.)

"I oversee the day-to-day operations of Medical Answering Services," she said, "so when Tim says you have a concern, please feel free to let me know."

(NOTE: Contact info for her and others is listed with the image and link at the end of this article.)

Private ride vendors attending the meeting said that they had a problem with "deadhead miles" or what Medicaid calls "unloaded rides."  This refers to transportation a client only one way, for example, leaving that person at a hospital for an overnight stay.  They were only being paid half of the trip with the client in the vehicle.  Returning without a client – "unloaded" – wasn't reimbursable.


Heidi explained that the issue had been resolved that day.  She had instructed MAS to reimburse private ride vendors for those deadhead miles.

Such issues can be resolved, she pointed out, by contacting her.

Russ Maxwell, MAS President, addressed the issue of problems with dispatchers handling complicated issues when a client was trying to book a ride.

"I wish I could tell you," he said, "that every person we hire [as a dispatcher] from the day they walk in the door knew the routine cold."

"Don't get frustrated," he continued, "ask for a supervisor, they will get you to where you need to go."

Agency representatives said that they had found MAS and Wayne Freeman, MAS COO, to be very responsive to their questions and problems.

MAS President Russ Maxwell said there was contact info at the MAS website including a phone number.

For people who want quick contact info for both NYSDOH and MAS it's pasted below. (Click on image to enlarge in a separate window).  You can also access the PDF file at this link. 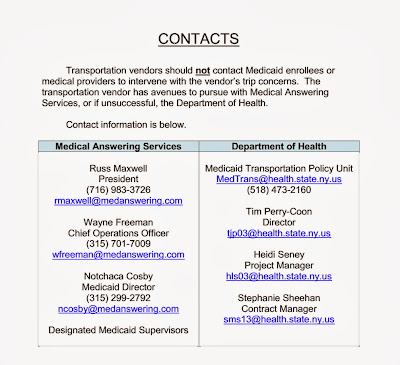