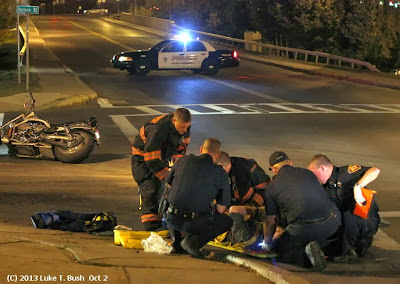 Around 8 PM this evening there was an accident at the corner of Broad and Durkee streets.  I don't know who was at fault but from what I could tell from the aftermath a car and motorcycle had collided.  The city police and a city fire department ambulance were already on the scene.

Most evenings I go to Smooth Moves, the eatery/cafe that sits on the corner where the accident occurred.  It just happened I arrived some time after the collision.

I took out my camera and took a few shots, staying near Smooth Moves, out of the way from the activity.  I didn't use a flash; my lens and ISO setting allowed me to document the scene without one. 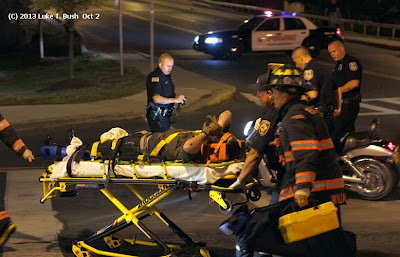 Someone was placed on a stretcher, apparently the motorcyclist.  I kept shooting, around twenty feet away from the EMTs. 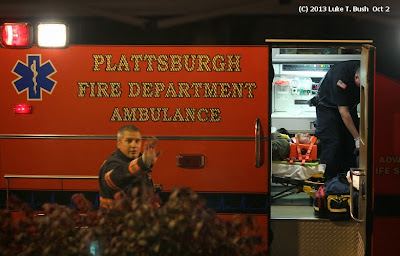 At one point an EMT/firefighter spotted me.  He looked at me and ordered: "No takes."

Sorry but if the event is in public view and I'm not interfering with your work, I can take as many shots as I want.  There could have been a problem if it was like the old days with the Speed Graphic camera using the brilliant retina-burning flashbulbs.  That would've been a real distraction.  But as I mentioned before, I wasn't using a flash.

Recently I've had close calls with motorists who apparently are too distracted to notice me riding my bicycle, even with it equipped with lights for nighttime.  One afternoon years ago an inattentive driver operating an oversized pickup turned and knocked me over while I was on my bike.  I came somewhat close to being stuffed under his truck's engine. 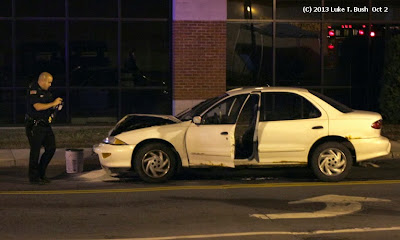 As I said before I don't know who was at fault with this evening's accident.  By sharing my photos of the scene maybe someone will be more aware the next time they're driving a vehicle and there's a bicyclist or motorcyclist in the area.  And maybe the cyclists will also think about driving defensively, not recklessly.  I've seen both sides make mistakes.

Someday I'll might end up in an accident and people with still and video cameras will be recording the event.  There is no law stopping them from doing that.  So it goes.

Comments can be posted below or sent via email: luketbush@gmail.com .

Surprised there aren't more accidents at that intersection. I ride both directions through there all the time and always fear for my life.

There is so little enforcement of traffic rules - speed, stop-signs, etc. in Plattsburgh, almost like the PD doesn't care.