Signs Not To Be Ignored 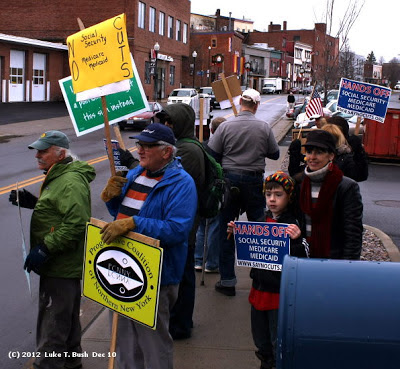 It's a matter of cuts.

No cuts to Social Security, Medicare or Medicaid.  No more tax cuts to the richest 2% of Americans.

Noontime.  The sidewalk outside the Gateway Building on Durkee Street where Congressman Bill Owens has an office.  About 20 peaceful demonstrators holding up signs to get the message out.

Meanwhile in Washington, DC President Obama tries to make a deal with the Republicans while a political Sword of Damocles -- the fiscal cliff -- hangs over the pols' heads.  After Midnight December 31 spending cuts and tax increases will kick in unless a compromise can be reached between Democrats and the GOP.

The demonstrators outside Owen's office are concerned that Obama might compromise and allow cuts in Social Security and other safety net programs.

Among the ralliers was Mary Alice Shemo, chair of the local People for Positive Action.  She said that the term "entitlement" wasn't a bad word: people her age were indeed entitled because they had paid into the system and were expecting what they had been promised.  She delivered a petition to Owen's office that was accepted by the congressman's aide who would pass it along to his boss.

Another demonstrator, David Curry, Chapter President of United University Professions, explained that similar rallies were being held across the country, promoted by the AFL-CIO to coincide with Human Rights Day.  Thanks to the Internet, he said, local people were able to network through email lists and organize their own rally.  He added that the AFL-CIO was going to hold a candlelight gathering later at 4 PM.

The rally had a cross section of representatives from other activist organizations such as Working Families, Northeast Central Labor Council, and the National Committee to Preserve Social Security and Medicare.

Depending upon how the whole Obama-Republican-fiscal cliff situation plays out, today's demonstration might be an inkling of things to come.  Bigger, louder protests.  And it won't be just members of activist groups, it will be Joe and Jane American taking to the streets, upset that the American Dream was really a bill of goods.