An Afternoon For The Birds

A crowd young and old packed the second floor auditorium at the Plattsburgh Public Library Saturday at 1 PM to see live raptors and learn about their habits.

Wildlife Rehabber and Educator Jonas Borkholder was accompanied by four rescued birds from Adirondack Wildlife and Rehabilitation Center in Wilmington, NY.  The audience of around 60 people learned about the abilities of hawks, saw-whet owls,  peregrine falcons, and barn owls.

The rehabilitation of injured animals involves criteria set by the US Fish and Wildlife Service.  A bird with a broken wing might not recover full use of that wing; releasing it to the wild would endanger it.  The birds the Jonas brought along met the criteria to live in captivity as part of educational outreach. 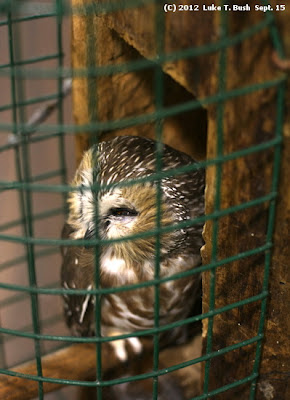 The tiny saw-whet owl, ensconced in its hollowed-out log cage, had suffered an eye injury.  Even though it looked like a baby owl, in fact the saw-whet was a full grown adult, four years old.

During the presentation Jonas held a peregrine falcon on his gloved arm, explaining that the one of the birds had been clocked at 242 miles per hour during a dive. 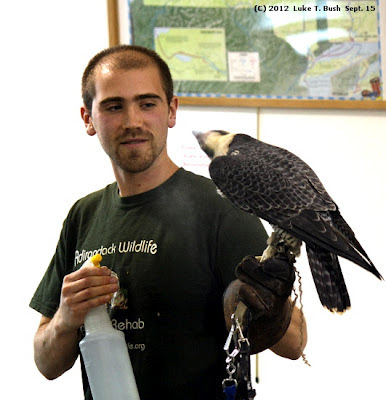 Someone asked him why the falcon was keeping its mouth open.  Like a dog that has trouble releasing heat through its fur, birds also pant because of the insulation provided by their feathers.  Jonas directed a wet mist from a spray bottle at the falcon to help it cool down. 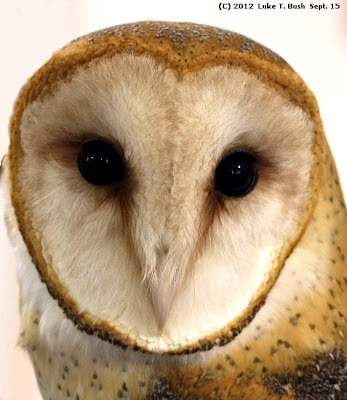 Jonas wrapped up his talk by presenting a barn owl.  He explained the bird's disc-shaped eyes helped it to detect its prey such as mice.  This owl could manipulate its feathers to control its sound detection and also had two opposing ears that helped to pick up noises, one aimed down, the other up.  By moving its head the barn owl could narrow its hearing to a specific area.

The program was hosted by the PPL Friends of the Library which is celebrating 25 years of service.  More info about PPL events can be found at online http://plattsburghlib.org or at its Facebook page.

You can learn more about the Adirondack Wildlife Refuge and Rehab at  http://www.adirondackwildlife.org/.  The site is loaded with information about its educational "critters." 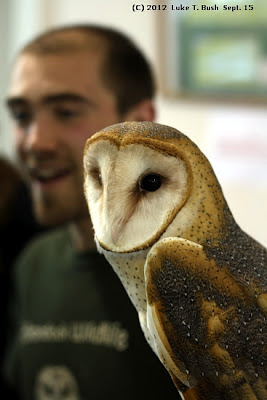 Thanks Luke. Jonas has been with Adirondack Wildlife for awhile. I'm sure he did a worthwhile presentation.

Thanks Luke. Jonas has been with Adirondack Wildlife for awhile. I'm sure he did a worthwhile presentation.