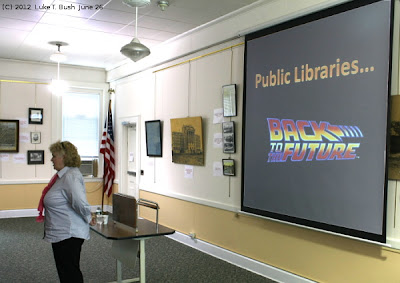 Using the latest in communication technology candidate for the PPL Directorship Connie Dalrymple explains at a public forum what she thinks the future holds for libraries.

For Connie Dalrymple it’s a matter of perspective when it comes to the future of libraries.  Less isolation, more collaboration and interaction with the public.

She spoke today as part of the ongoing process to find a new director of the Plattsburgh Public Library during a noontime forum held in the PPL second floor auditorium.

Backed up by a digitized slideshow, Connie discussed the evolution of the printed word from stone tablets to paper to electronic media.  She also discussed the history of libraries, how they evolved from institutions only accessed by the wealthy and the privileged to the more democratic ones of today open to the public at large.

Traditionally a library has been a quiet place where a patron would borrow a book and then go home and read it in isolation, she said.  With the impact of modern electronic communications there can be more isolation, a person staying at home in front of a computer.  She mentioned how her teenaged sons had become “internet waifs.”

Libraries have to deal with this isolation factor through programs such a pre-K storytelling events and book clubs.  When Connie made this point there was an image behind her on the movie screen of overlapping hands, a symbol of collaboration.

Connie is a middle school science teacher in Oneonta, NY with previous work experience at various libraries, including managerial duties.   She said she was interested in the PPL directorship because of her strong interest in libraries.

According to Library Board member Virginia Brady two additional candidates will be making presentations in July, dates and times to be announced.  She said that tentatively a new director will be chosen by the end of the summer.
Posted by Luke T. Bush at 4:37 PM