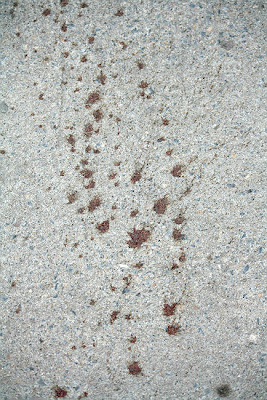 Sunday evening. Mother’s Day. I’m walking down Margaret Street when I notice of trail of dark blotches along the sidewalk into the street. I don’t know what caused the stains but I snap a few shots for my records.

Today I heard via word on the street that there was a stabbing, maybe two, in the same location where I found the trail of blotches. The incident (or incidents) occurred early Sunday morning around 1 AM in the area of Rumors bar. The stains and the story apparently match up.

According to the story a college student or students from one of Plattsburgh’s two institutions of higher learning were involved. If – and I do mean if – that’s the case, don’t be surprised if it takes a while – like after graduation – for the local mainstream media to mention the incident.

After all, the take a look at the riot at the VFW on Boynton Avenue involving Clinton Community College students that occurred on May 8th, 2011. If you go to the online version of the Press-Republican article you will notice that the story wasn’t filed until twelve days later on May 20th. Of course, maybe the PR will surprise me and get the details on this case out in the open soon.

Obviously Plattsburgh’s local colleges don’t want stories like this public just before graduation with mom and dad and other relatives visiting to see Johnny and Jane graduating from an institution they assumed was a safe place to send their offspring. Not to assume that there’s any connection between advertising dollars given by the colleges and the local media.

And maybe if the responsible party or parties are found guilty of such a violent act as a stabbing, they will get more than just a charge of disorderly conduct. Then again, if someone has connections…


UPDATE:  5/15/12, 7:50 PM. Props to the PR for covering the story. Maybe this will clear up some of the rumors and also people won't be using Facebook to track the story.

UPDATE 2:  5/15/12, 10:40 PM. Hey, even WPTZ-TV/Channel 5 provided some info on the story even though it didn't happen in Vermont. Then again, if the incident occurred in downtown Enosberg Falls, maybe there would be more about it than just a blurb.