Who's Feeding The Duck? 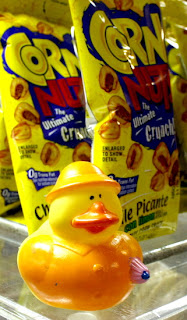 Ducky and Denise are at it again.

WIRY AM radio "personality" Ducky Drake had his feathers ruffled when Denise Nephew, president of the local AFSCME union, called him stupid in a public email.

Ducky does lend himself to such an observation after making nasty remarks about various people during broadcasts of his soapbox forum, "Is It Just Me?"   Sometimes he utters disrespectful commentary.

In his latest disentary Ducky went after Nephew again, this time for her email saying that advertisers should be contacted to boycott his program.  The email wasn't for intended for general distribution -- apparently it was directed at AFSCME members -- but somehow Ducky got a copy of it.

A while ago Ducky in another one of his disentaries mentioned that someone overheard a comment at the Plattsburgh Public Library and that bit of info was passed along to him.

So who's feeding him all this crucial intelligence?

I have my own sources and have discovered the existence of a powerful secret organization.

An interesting parallel to the formation of this organization can be found in the history of US labor unions.  To increase its influence, the American Federation of Labor joined forces with the Congress of Industrial Organizations, thus becoming the AFL-CIO.

Locally, two groups of fans spying for Ducky Drake have merged to increase their intelligence-gathering abilities.  The Drake Intelligence Corps has united with the Heroic Envoys of Ducky: DIC-HED.

Watch out for the DIC-HEDs.

Thanks for your humorous spin on this sad, brooding little man. Brooding - get it? I always wonder why Plattsburgh celebrities have to be named after animals: Ducky Drake, Foxy Gagnon, Goose Gagnon. When the issue of raising chickens in the city came up, I figured he'd be 100% behind the idea. After all, he is named after poultry. In my three years as City Councilor, I can honestly say that nothing he ever said on the radio, or off the air, ever made one whit of difference on deciding the issues. I don't really know who makes up his audience. In seventeen years of living in Plattsburgh, I've only run across a handful of people who admit to listening to him. Even fewer take him seriously.