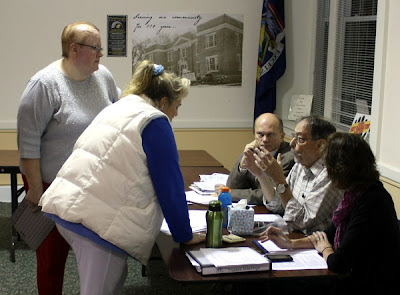 To compensate for underheating the recently fixed Plattsburgh Public Library boiler decided to crank up the temps in the second floor conference room. From freezing to frying. I was down to a t-shirt and still felt too toasty.

Despite the sticky conditions the tone of the ad hoc committee meeting remained cordial. The committee was formed to deal with the PPL budget crisis. Back on December 5th the library's Board of Trustees voted to eliminate four positions to deal with a shortfall.

Harold Brohinsky, a trustee, chaired the meeting. Sitting with him were trustee Don Moore and also Jamie Parrotte, PPL Administrative Assistant, who recorded the details.

In his opening remarks Brohinsky stressed the purpose of the committee was to listen to alternative budget proposals and comments by the public. The committee would make no decisions but would report back to the Library Board. (The Board of Trustees will meet Tuesday, 12/20/11, also in the PPL second floor conference room at 4:30 PM.)

Two budget proposals were given to the committee. PPL librarian and local AFSCME Vice President Karen Ricketson outlined a plan by the union where cuts could be made without laying off any employees. As she had publicly stated before she said the union was willing to work with the board to avoid jobs being eliminated. She mentioned that eleven grievances filed by the union could be dropped.

Tim Carpenter presented the second proposal. Carpenter is a city councilor who also serves as the liaison between the library and the Common Council. Despite the contentious nature of the budget crisis he has acted like a politician but not in the pejorative sense. He has been trying to bring all sides together -- the board, the Common Council, the union, and the library employees. He's been a voice of reason, one of the few during the situation.

In contrast to the union proposal, Carpenter's plan focused on a four year period, looking beyond 2012. Also trying to avoid staff reduction, he proposed different cuts and also the formation of a grievance committee for the library to save on legal fees.

The meeting was then open to public comments. Four library employees took to the mic, saying both proposals should be considered. Between the two the employees favored Carpenter's four-year plan because it worked towards a more long-term solution.

After the recent upheaval it's obvious employees want stability, not uncertainty, with the library's future. Two employees found it difficult to speak, the stress evident in each one's voice. Maybe the alternative budget proposals can lead to a way to provide stability and cut stress, not staff.

What was refreshing about the meeting was the emphasis by all speakers to compromise and work together.

During previous meetings where the budget crisis was discussed, both Library Board and Common Council, library supporters found their voice and spoke up, breaking what some thought was the cold silence by city reps. Sometimes participants on each side became too warm, getting hot under the collar.

But this evening the theme was trying to find a common ground.

A theme that everyone -- including the problematic library boiler -- should take to heart.