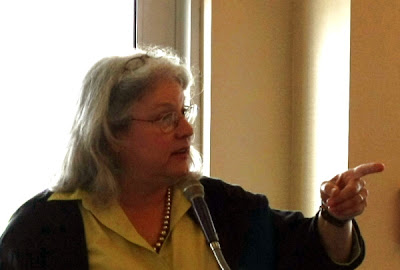 Julia Spencer-Fleming makes a point during her presentation.

She is the author of the Clare Fergusson/Russ Van Alstyne novels set in the Adirondack region of New York State. Not a surprising choice for a setting considering her local connection.

During her presentation at the Lake Forest Retirement Community Julia explained how her parents met at a mixer in Plattsburgh, her father a soldier, her mother a college student. Her parents were soon married and her mother returned from the honeymoon "with child" (to use a phrase from those days). Julia said her father had to speak with college officials who wanted her mother to drop out because a pregnant woman, albeit married, might excite the imagination of young students.

Julia shared many personal stories and insights during the luncheon sponsored by the Friends of the Plattsburgh Public Library. When she was growing up the local public library was one of her favorite places to hang out. She praised libraries for introducing young readers to the world of books and also for providing sources of information for research.

Along the way Julia caught the science fiction bug. She tried writing a SF novel but her first effort met with mixed reactions. Her prose was publishable quality but her style of science fiction was cliched, outdated.

So what started out as a murder mystery aboard a space station ended up as story set in the Adirondacks. Julia enjoyed stories about amateur sleuths and so created the character of Reverend Clare Fergusson, an Episcopal priest from the south who finds herself transplanted to the hinterlands of New York State.

During the Q&A someone asked Julia why she made her amateur sleuth a priest. Julia explained that such a character offered a different level of interaction with other characters. A religious person would know some of personal and spiritual problems of the congregation, thus opening up opportunities for plot development.

The first novel, In The Bleak Midwinter, also introduces Russ Van Alstyne, police chief of the fictional town Millers Kill. Throughout the series Clare and Russ have to deal with their attraction to each other, complicated by the fact that the police chief is married. This angle gave a different twist to the each novel in the series. While her SF attempt was considered old hat, readers became fans of her mysteries, responding to her fresh take on a man-woman duo pursuing clues and solving a crime.

Julia revealed that she was one of those aspiring writers who in some ways didn't know what she was doing. She didn't follow the same path to publication that most writers traveled. She entered her first Fergusson/Van Alstyne novel to a contest and won. When asked if she had a second novel, she indicated that she did, resulting in a scramble to create another plotline and full story.

And while Julia was open to answering questions from her fans, one mystery remained. Why was she wearing two eyeglasses, the second pair parked up in her hair? A new take on bifocals? 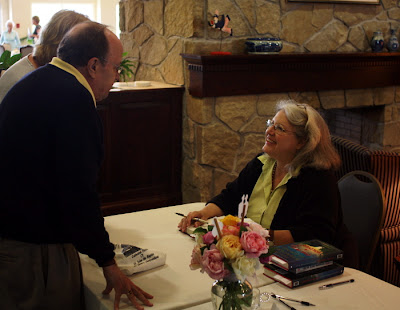 Writer Julia Spencer-Fleming signing books and chatting with her fans.