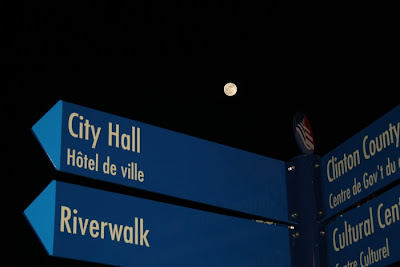 Yesterday evening a supermoon rose into the sky.

And what was so "super" about it? Didn't it look like any other full moon?

Yes, except it was 12% larger and 30% brighter than your ordinary full moon crossing the night sky. Supermoon refers to an event when either a new or full moon is closest to our planet. What you see in my images hasn't been observed in 18 years.

(Brings to mind a story. Back in the dim past when I was in college, I was a reporter on the student newspaper. I had to get up early one Saturday morn to conduct an interview an astronomer lecturing at the campus, an assignment handed down by my editor. The astronomer was an OK guy but I was tired and a bit snarky. This astronomer and two of his colleagues had recently discovered rings around Uranus. So I asked the inevitable question. I noted that the astronomer preferred the pronunciation "YUR uh nuhs.")

And to round out your supermoon knowledge: There's speculation that the increased gravitational pull of the moon during a supermoon event is responsible for natural disasters like earthquakes and tsunamis but nothing has been proven. The consensus is that there is no connection.

NOTES ON IMAGES: The shot of the moon and the "UFO" (the lights atop the towering pole in the downtown Plattsburgh parking lot) was cropped but the size of the moon wasn't changed. The only other photo-editing was adjusting the color balance of the moon (I hate a blue moon). The images with the clock and signposts involved composite images and level adjustments. Due to the limited depth of field, I shot a series of images, the foreground object in focus, then the moon in focus, and combined the in-focus images into one. Fill flash was used for the foreground object. And, yes, I did enlarge the moon a bit when after I pasted it in but not that much, placing it in the same location. I think I'm allowed 12% on 12%. 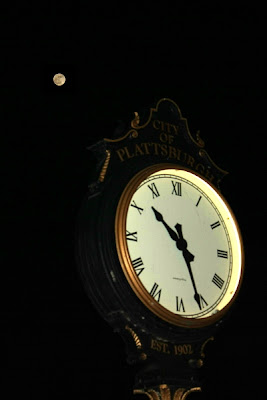 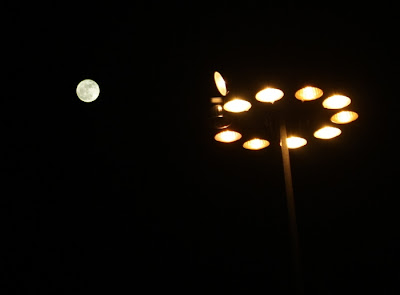