On occasion I’ve mentioned the problem with dogshit scattered around downtown Plattsburgh. What can be done about the problem?

Let’s look to Seattle where real life superheroes are on patrol. Citizens dress up and come to the aid of their community. Here’s an image of one Seattle masked man, Phoenix Jones: 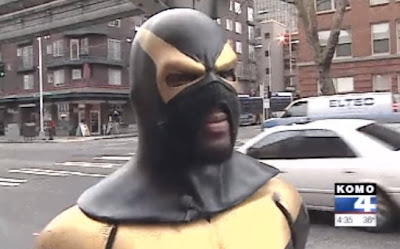 So why not have a special superhero patrol downtown Plattsburgh to take care of one of its chronic problems (besides boredom)? This person could be male or female but in this case it would be better to have a distaff volunteer because women are genetically predisposed to the task thanks to the C-gene (the gene that programs them to clean and pick up). With pooper scooper in hand, this brave superheroine would patrol the dangerous dogshit dotted streets and alleyways.

I’ve even wrote a theme song:

Does she scoop
Stuff with flies?
Take a look
No surprise!

Hey there
There goes the Scooper Girl.

Until then, keeps your eyes not on the skies but on the ground.


---Hat Tip (or should I say cape flap?): Kelly for introducing me to Phoneix Jones.

I shall stick with my pre-existing superhero identity, Grammar Nazi, and correct your spelling of "Phoenix." ^_^

Gee, I got the superhero Phone-ix, Dynamic Defender of Telecommunications, mixed up with Phoenix Jones. Holy spell-check, Grammar Girl!