Schwarzenegology Opens Up Cosmic Can Of Metaphysical Worms 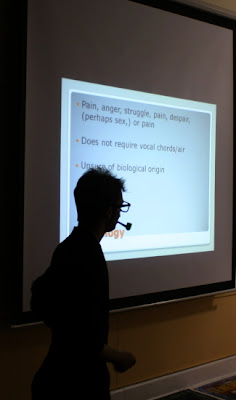 How can a man grunt monosyllabically when he has no air to breath?

Such a puzzling question was posed Saturday evening at the Plattsburgh Public Library. Those in attendance were treated to a rare erudite event of phenomenological proportions when Professor David Fuller, FoBS, lectured and held forth with his field of expertise. (Indeed, Fuller is a man out standing in his field. Alone.)

Fuller was the honored guest of the movie-critiquing club, ISMST3K, before its presentation of the film d'art, Hercules In New York, starring Arnold Schwarzenegger. The distinguished scholar provided a dynamic dimension to the film with his short talk on Schwarzenegology.

What is Arnold Schwarzenegger? A man, a myth, or quantum conundrum? How can one safely grok the mind-boggling concept of that steroid android known by the appellative "Schwarzenegger?"

Schwarzenegger transcends reality from his reality-bending use of English, Fuller pointed out, to his primitive one-syllable communications that defy physics. Using PowerPoint to power his points, Fuller showed a scene from the movie, Total Recall, with Schwarzenegger grunting in a vacuum.

No one knows how a cat produces a meow, added Fuller. Such a phonological mystery also surrounds Schwarzenegger. What biological origin could be behind such a power to utter caveman sounds sans vocal chords or air?

Such details were held in everyone's mind during the viewing of the movie like a Hulk posterior vapor emission . But some people in attendance were shouting rude comments pertaining to the action projected on the silver screen. What was that about? A cinematic classic such as Hercules In New York can only be abysmally appreciated by a state of awed silence.

For more information about the movie-critiquing and scholarly research organization ISMST3K, one may avail oneself to contact Caleb Mosher at moshierc@cityofplattsburgh-ny.gov or by checking out the society's Facebook page here. Its meetings are usually held the last Friday of each month at the Plattsburgh Public Library circa 7 PM. 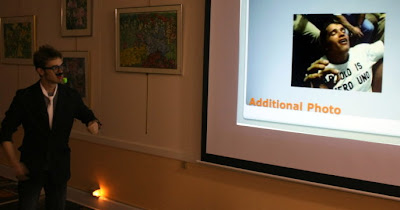