Check out this TSA poster: 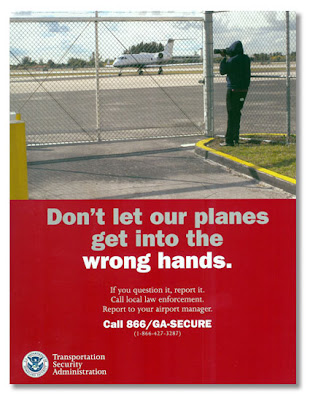 See that guy wearing a hoodie, camera and telephoto lens in hand? Yes, the Transportation Security Administration wants you report anyone taking photographs of airplanes. Aviation photography = terrorism. It's a scientific fact.

But does this warning go far enough? Maybe the warning about photography, aircraft and terrorism should be extended.

What about a show being put on by hobbyists flying radio-controlled model airplanes? Maybe terrorists want to attack there, knocking a few models out of the sky with stinger missiles. And don't forget about kids and paper airplanes. Imagine the horror when a terrorist grabs Johnny's little folded dart and rips it up. All of this means extensive pre-planning involving photos.

The National Press Photographer's Association raised a stink with Secretary Janet Napolitano, Department of Homeland Security, about the poster, asking for it to be removed because it unfairly depicts all photogs as suspected terrorists. In a NPPA press release it's pointed out that photography is protected by the First Amendment and that law enforcement officers have interfered with "lawful activities by photographers under the guise of preventing terrorist activities."

Of course, in a democracy, all individuals are treated equally, whether one be a citizen or a police officer. Some police vehicles are now equipped with dashboard cameras to record events after someone is stopped for questioning. If the police can record you, then you can record them, right?

That depends. In some cases around the country police officers have been caught engaging in dubious activities. A citizen records the event with a video camera and ends up being arrested for violating the wiretapping law. Apparently the problem is with the audio, not video, portion of the recording, thus the charge of illegal wiretapping.

Recently one such case was tossed out by a Maryland judge, as reported by techdirt.com.

Obviously that judge is a terrorist!