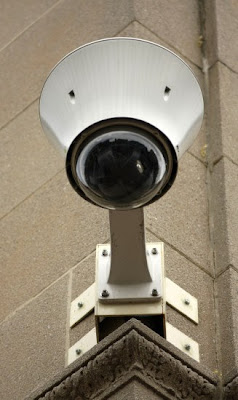 As I’ve mentioned before at this blog I’ve been questioned a number of times for taking photographs in public. And on occasion the questioners were police officers.

I wasn’t doing anything suspicious, just out in plain sight, photographing objects like an American flag. I wasn’t peering into window late at night with my camera.

But even in broad daylight I get questions. Sometimes people see a photographer and they suspect his intentions. I don’t mind answering questions but some people believe they can maintain privacy in public, even thought a photographer is shooting a reflection or object, not them.

The law doesn’t work that way. Generally speaking, if it’s in public view, one may take a photograph. And as long as someone isn’t interfering with their work, a photographer can also record police activity
.
It doesn’t bother me that it’s been announced in the local media recently that the City of Plattsburgh Police Department will be adding more surveillance cameras downtown. I know when I walk into a bank or supermarket that I’m being recorded by cameras. That’s the way it is.

Unless you want to live in a dictatorship.

The Taliban prohibited photography when they controlled Afghanistan. Don’t let this country get Talibanized.