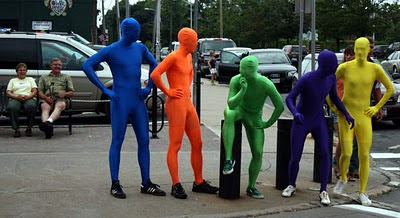 Yup, I'm repeating an image. This originally appeared in my post, Roy G. Biv Gang Goes On A Colorful Spree. These guys -- I don't know who they were, I just made up the RGB Gang name -- were wearing Morphsuits.

As discussed in a previous post, Gorilla Suit: What’s The Big Hairy Deal?, there is a New York State law that prohibits the wearing of masks in public unless special permission is granted by the local apparatchiks. In Plattsburgh anyone who wants to wear a mask in public needs permission from the City Chamberlain. Don't ask me what the connection is between the CC's office and a law-enforcement issue. Maybe the City Chamberlain also goes around and issues parking tickets, who knows.

If these Morphsuit guys return, I hope they don't run afoul of the mask-registration law. But it seems their colorful frolic during the Mayors Cup event has lead to condemnation by an irate commenter to "Speak Out," the Press-Republican's "public service" where anyone can email a remark anonymously and impress the world with his astute acumen.

Anyway, in light of the anti-mask law, here's this "Speak Out" comment (I'm assuming it's not a gag) that appeared in the PR Aug. 27th edition:

I am terribly offended by the public usage of so-called "Morphsuits" at this year's Mayor's Cup. I can't believe that people could be ignorant enough to disrespect everyone like that. I have a 5-year-old daughter who cried every time she saw them. She was horribly mortified. "Power Rangers" used to be her favorite show, and now she can't even stand the sight of it. I am calling for a citywide ban of these atrocities.

So what's next? A ban on all masks? Remember: If you outlaw masks, only outlaws will have masks.