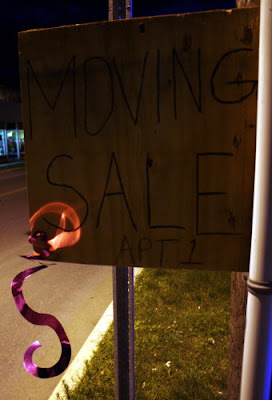 My nickname for the bar is the Alley Oop because of some patrons who like to hang out front, right next to the sidewalk, and make annoying comments to passers-by.

Late evening. I'm walking home when I notice a potential image. Under a streetlight there's a handmade sign with a purple plastic twirler hanging down from it. Some of the light is being reflected back up on the sign, a twisted glowing ribbon.

The trouble is the sign is near the Alley Oop. Two patrons are standing on the front porch. They don't bother me but I have the feeling if I stop and take the shot, even with my camera not aimed at them, I might get hassled.

I walk down the street and think about my options. Come back at 3 AM and maybe everyone has left so I can shoot in peace. Screw it. Other option: Be intimidated by potential trouble and forget about the shot. Screw it.

In a while I return, noticing that no one is out front. But just before I arrive at the spot, two more patrons, man and woman, come out and stand around. I ignore them, get close to the object and take some shots, making adjustments as necessary. I'm close to the sign, shooting away from the couple.

I cross the street and walk away, checking my LCD screen to make sure the shots came out.

In the background I hear a gruff voice say, "Uh, are you some sort of artist?"

I ignore him. It's the guy on the porch. I know better than to reply. I don't know how lubricated with beer he is and I don't want to find out. His female friend laughs.

As I keep walking I hear the same loud voice say: "Taking pictures around here while we're having a talk."

I didn't take the bait. If he wanted a private conversation, he should've retreated inside to a dark corner of the bar -- there are plenty of them -- instead of standing next to the sidewalk.

What happened just reinforced my POV. Most patrons don't bother you but there are a few that will attempt to create a confrontation. No use talking to those types. To communicate on their level I would have learn how to beat my chest and grunt. And instead of a camera, I would have to lumber about with a beercan in one hand and a wooden club in the other.