Over at the Monster Blog a comic book fan has scanned in lots of covers from old Marvel Comics but not of the superhero variety. Before Spider-Man and the Hulk made it big, writer Stan Lee and artist Jack Kirby were cranking out all sorts of giant-monster-on-the-loose stories during the late 1950s-early 1960s. This was back in the days of Godzilla and movies like "Them," giant mutant ants on the loose.

It's great for someone like me to see those covers and read about all sorts of crazy creatures that appeared month after month. But after a while Stan and Jack were scraping the bottle of the barrel. It's hard to come up with a different type of monster, a scary entity that tops the one from the last issue. That's how we ended up with bizarro menaces like Groot, a huge mobile alien tree who was defeated by a scientist and his brilliant solution to the threat, super-termites.

A few of the covers I found inspiring, lending themselves to parody. Here's one cover featuring a water menace: 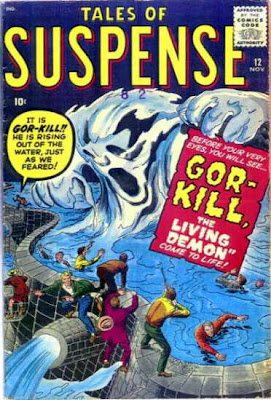 In light of events in the Gulf with BP (British Petroleum) and its deepwater oil platform polluting the waters, I envisioned a new version of the cover: 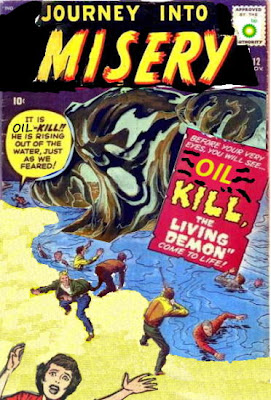 Actually is this my second version. I sent a even cruder one to a friend, Rick Arthur, who is much better at Photoshop manipulation. He ran with my idea and created this parody: 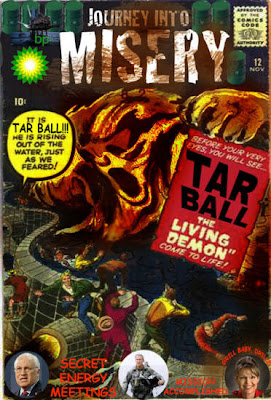 I have other covers in mind to get "the treatment" by me. Believe it or not, doing one of these parodies is time-consuming, especially when one doesn't know all of the nuances of Photoshop (or in my case, GIMP). But when I have the time, another mutated cover will be coming your way.

Brilliant Luke! I like both versions. Your photoshop skills aren't that terrible!

Journey into Misery... the absolute truth.