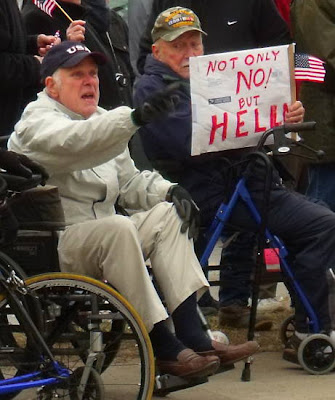 What better way to celebrate the first day of spring than shouting, exchanging barbs across a street?

Saturday, March 20, after 2 PM. The intersection of Broad and Durkee streets, downtown Plattsburgh. You could call it North versus South.

The north side of Broad Street: the pro-Obama-healthcare demonstrators. The south side: The Tea Party/anti-Obama-healthcare crowd. A double yellow marks the division between liberals and conservatives. City street as DMZ. A police officer directs traffic.

But not everyone is into the schoolyard taunts. On each side people just hold up signs and respectfully disagree.

A woman from the south side wanders over and says hello to a woman she knows on the north side.

The northsider asks the southsider: "Oh, you belong to the Tea Party?" The southsider replies yes, the two women exchange pleasantries, and then say goodbye. No need to argue.

But the vocal participants keep at it, hurling remarks back and forth over the dividing line in the middle of the street.

Up above, no sunshine, just gray skies on this cold spring day. 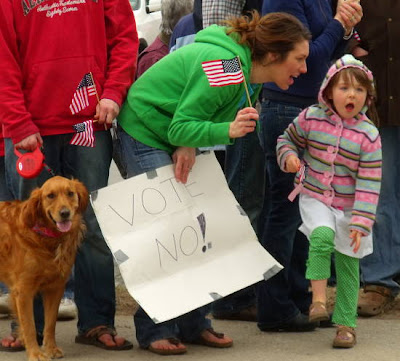 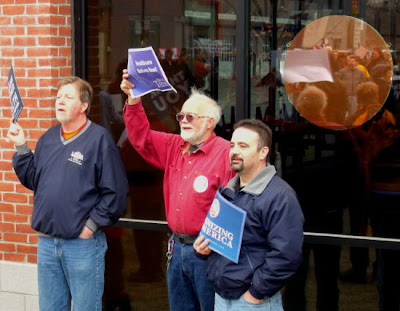 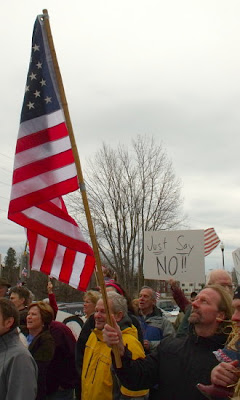