There used to be crosswalk markings running across Oak Street from the entrance to the Robert S. Long Apartments to Clinton Street. This crosswalk was helpful to elderly and handicapped people trying to get across the sometimes busy street. Oak Street has been repaved and most of the old markings have been repainted -- but not that crosswalk. 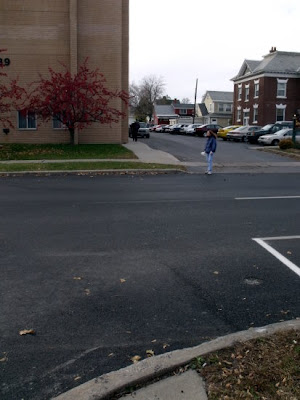 Of course, pedestrians are third class citizens in Plattsburgh. Years ago there used to be crosswalk buttons to control the stoplight at the intersection of Brinkerhoff and Oak streets. But those buttons are long gone. Vehicles, not pedestrians, have priority at that intersection.

And if no one pays attention, the crosswalk that used to be near the Long Apartments will turn up missing. That will indeed make Oak Street a better speedway: no reason to for cars to slow down.

Both Oak and Catherine need to be addressed as dangerous streets. Now that they have been paved, both are rife with speeders.

I drive both those roads daily and have never, ever seen police enforcement of speeding or stop-sign violations.

Worst is North Catherine, which has not been paved.

And don't forget the bicyclists. There is absolutely zero consideration for cycling in the city with these "improvements".

Probably because none of the city leaders ever walk or ride.