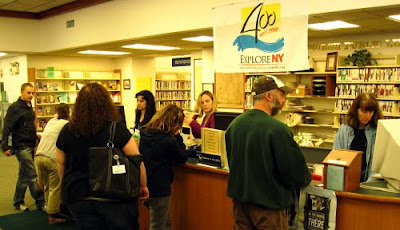 On some days it takes three clerks to keep up with the patrons at the Plattsburgh Public Library.

If you appreciate the Plattsburgh Public Library and its services, then show your support by showing up at the library budget hearing on Tuesday, November 10th, at 5:30 PM in the PPL second floor auditorium. This meeting is open to the public and city councilors will also be in attendance.

I wonder how many city councilors haven't stopped by PPL lately and seen the work that has been done, including the two art galleries on second floor. (I wonder how many have never visited at all.) The library has been making do with less for too long.

Compare Plattsburgh to the community of West Lebanon, NH. As reported on WCAX-TV, West Lebanon has almost completed a new multi-million dollar library that will offer more services. To quote from the WCAX story: “Library officials hope the building will be an anchor in revitalization efforts taking place in this part of the city.”

Unfortunately for downtown Plattsburgh, at times the only news about “revitalization” involves a new bar opening up.

PPL deserves restoration of its budget so that it can work with the proposed Arts Corridor to offer a more upscale venue than brewholes.