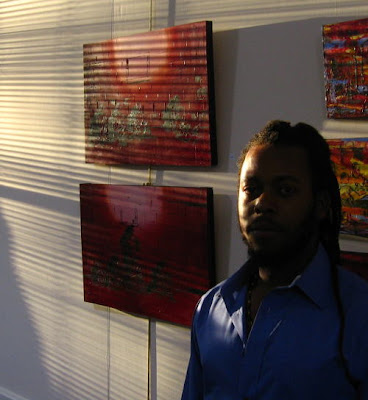 “We're doing you a favor,” the officer continued during the phone conversation. “We're sending him to the Buffalo detention center. He'll be processed even quicker in two or three days.”

Those few days turned out to be three long weeks for Kim's husband, Gharan Burton.

Gharan grew up in Dominica, a small Caribbean island. He attended college at Plattsburgh State with a student visa. After he graduated from PSUC, he had a one year work permit and when that ran out, he started the paperwork to become a citizen. Since the paperwork was being processed, Gharan thought that there would be no problem until his citizenship was finalized.

One day in July he was with his wife Kim, a passenger in her car. A state trooper pulled Kim over for a seatbelt violation. He also ran an ID check on Gharan.

This ended up with Gharan being taken into custody by the Border Patrol. He was transported to an immigration jail in Buffalo.

While incarcerated in the detention center, Gharan was worried about his future, whether or not he would be deported. He spent part of his time sketching, drawings of his environment that would become the basis of the exhibit, “Three Weeks Revisited,” now at the Plattsburgh Public Library. The exhibit also features works by his wife.

Some of the paintings based on the Gharan's sketches are stark, a large white sun in the background while detainees stand near a prison fence topped with razor wire. The images are drenched in red, an intense color to reflect his feelings at the time, anger and despair. The sun beyond the fence symbolizes his hope for a bright future, freedom.

Gharan is a quiet, soft-spoken man. Not the type one would associate with dangerous individuals.

He was finally released from the detention center after Kim hired a lawyer and the charge was dismissed. The problem was that Gharan hadn't notified the Department of Homeland Security about his status. He would have done this if he had known about it. Just a matter of communication.

Another example of bumbling bureaucracy. The story of red tape – and the red images it created.