A bunch of photos and a few mental notes. Enough material to create a post about Stan Burdick’s recent presentation at the PPL (Plattsburgh Public Library).

For the uninformed, write a short background graf to get them up to speed:

Stan Burdick is an editorial cartoonist whose work has appeared in various North Country newspapers. A selection of his political graphic commentaries is on display this month at the PPL. He is the director of the Ticonderoga Cartoon Museum. His presentation, “Tall Tales and Riotous Rhymes,” for both adults and children, uses his cartoons to illustrate silly stories and poems. (Ever hear the one about a purple cow?)

Now need a title for the post. “Stan Burdick, Cartoonist” sounds too bland. Need an adjective. How about “genial?” Check the dictionary. Besides meaning “amiable,” it can also be defined as “of or characterized by genius.” Perfect on both counts.

Now to pick out a photo that shows both types of his geniality, personal and artistic. 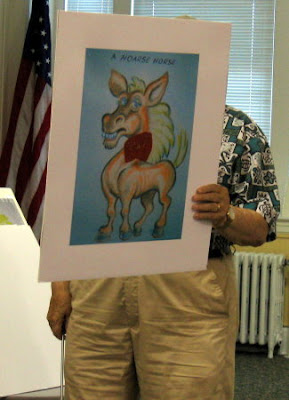 No, that doesn’t work. 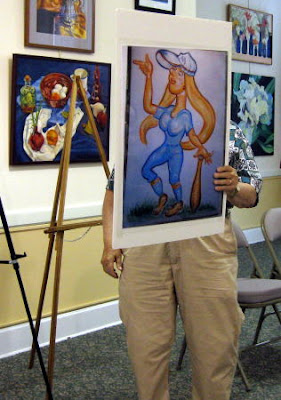 And this doesn’t bring out his friendly style.

Let’s try another one. 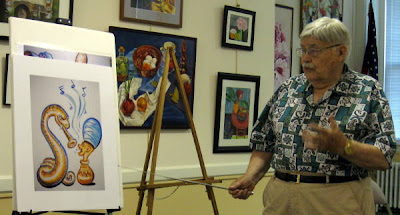 OK, this is better. You can see his face. (Note to aspiring photographers: viewpoint is everything. Don’t sit there; get up and move around.)

In this shot he’s explaining how to imagine a role reversal to create a cartoon, in this case, a snake charming a snake charmer.

The next two shots show the use of another kind of reversal involving a hidden image. Flip the image from top to bottom and you see the rest of the story. 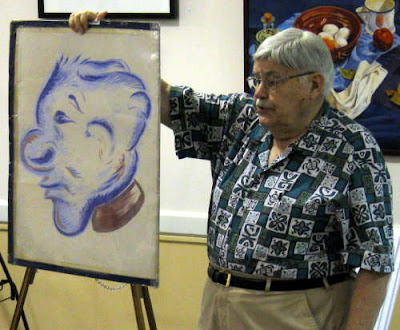 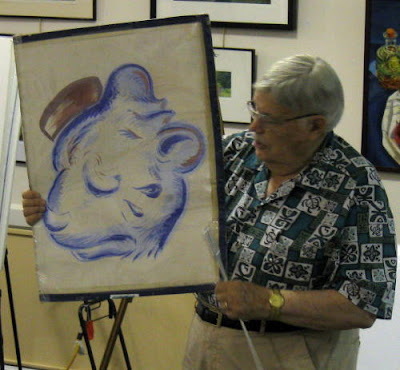 During the Q&A that followed the presentation, I asked Stan how he dealt with creating editorial cartoons while facing a weekly deadline. He said he roughs out some ideas and puts them aside. When he gets writers block – actually, cartoonist’s block – he goes into his idea file and an item will trigger the inspiration for a cartoon.