From the police officer’s POV it’s an unusual sight. A man kneeling down, head low with his butt in the air, as if in prayer in a Tibetan temple. Maybe the guy is drunk, fell, and can’t get up. Or maybe he’s another victim of a psychological problem.

When it’s dark out, those are reasonable assumptions.

But I had a good reason to be in that position, even with my butt up and head down.

I’m walking home. A rainy night. The lighting is dim beneath the overhang to an empty storefront. Despite the weak illumination provided by a streetlight, I noticed something huddled up against the wall. A toad. With all the rain this summer, even he wants to get out of the wet.

I set down my umbrella and get out my compact camera. I take a couple of shots while standing over him with the flash but I don’t like flash shots as a rule. And I don’t like blinding some poor critter with a lightburst.

Time to get down and close. I turn off the flash, activate the macro setting. I set the shutter for 3 – 4 seconds. I get down in a position that doesn’t make my back problem flare up as much. Even with the camera set on the sidewalk and carefully pressing the shutter, my shots on the preview screen are blurred.

The toad doesn’t move that much. The pre-focusing lamp and the blinking timer light seem to hypnotize him.

But this takes time. The longer I take, the greater the chance is that someone will spot me and wonder what the hell is going on. It’s happened before.

At one point a car stops on the other side of the street. I wasn’t surprised. I look up to see a black-and-white unit of the Plattsburgh PD. The police officer rolls down the window.

“I’m photographing a toad,” I explain.

“Cool.” And the officer drives away.

The way it should be. 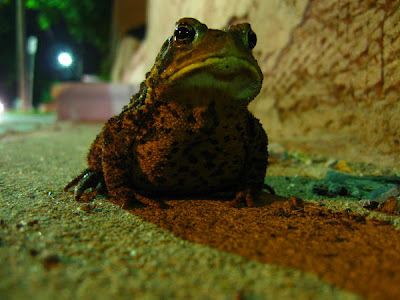