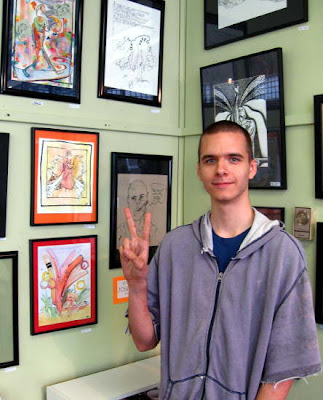 His works are now on display at Restless Roots Artistry, 36 Miller Street, north of the Plattsburgh post office. A scan reveals that his art isn’t locked in to a particular style. Roads never traveled, off in all points on the compass. Subconscious set loose.

As he explained in a recent email interview: “I hate having to draw the same thing in different ways a thousand times over. Eleven to twelve is my limit.”

At this point the Beekmantown High School senior isn’t interested in production art, i.e., drawing the same characters and scenes ad nauseam for a comic strip or comic book series. He’s such a free artistic spirit that he’s not hung up on expressing a message or theme to others.

Joshua doodled this explanation: “Sometimes people say, ‘I don't get it’, to which I usually reply ‘there's nothing to get’. My art has no deeper meanings or social implications or anything of the sort. People shouldn't get the idea that I'm all art, at all. Recently, as in the past year, I only ever draw on the side of homework to pass time. To summarize, my art is just doodles that decided it would be a good idea to shoot opium directly into its brain, to increase its sense of self by 1,000. If that makes any sense. Which it might not.”

He also offered this self-sketch:

“I was born in the North Country. I have lived here all my life, only ever traveling (rarely) to Canada and Vermont. Who in Plattsburgh doesn't? Um. I love food. Most people like eating, eating is their strong suit, but I love food. All sorts of food. I cringe whenever I see half eaten food in the garbage or on the ground. I suppose people don't know what it's like to really be hungry. Anyway, my favorite color is purple. Uh. I have big hands. My friends call me Bendy, but I'm not all that flexible, I just move funny sometimes.”

Joshua credits one of his former teachers at BHS, Ed Hoffman, for developing his talent. Two art classes in his junior year with Hoffman helped him become a better artist. 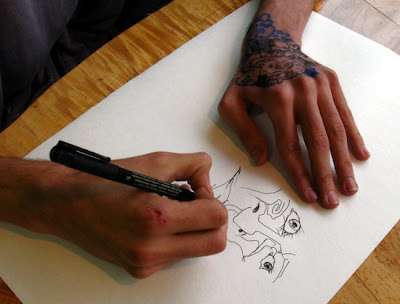 During my photo session with Joshua he mentioned that he’s getting tired with drawing human (or humanoid) heads. He’s considering a new subject: fish.

And what are his plans after he graduates from high school?

“Probably, I'll find some sort of job. To make money with. I'll save up a bunch and start moving... uh... West. Not much East to go before I hit a figurative wall/literal ocean. I dunno. It all depends I guess. A lot can happen in a month or two.”

More doodling. To see what happens.