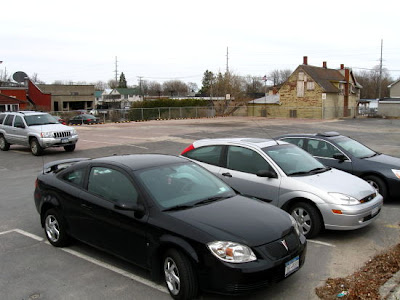 Only four parked cars. Plenty of unused spaces. What a waste.

The parking lot where the Sunbright Laundry used to stand on Margaret Street points to a key problem with parking in the downtown Plattsburgh area.

After the Sunbright building was demolished and hauled away, there was free parking on the lot. Then the property owner stated charging for parking, $16 a week. Now less people park there, especially employees at the main Post Office on Miller Street.

So where did the postal employees go with their cars? Over to the residential section of Miller Street where parking was still free, without any time restrictions such as two hours.

Of course, the owner at the former Sunbright site has the right to charge for parking. And the postal employees have the right to park where they have relocated on Miller. But the extra cars parking on Miller sometimes cause problems for the residents who live there. Some cars park too close to a narrow driveway, making it difficult for a resident to pull into traffic. Also, on a busy day cars line up on both sides of the street, making the passageway narrower for two-way traffic.

It’s said that there’s no problem with parking in the downtown area, only the perception of one. But the shift from the lot on Margaret over to Miller Street proves that the “perception” excuse is really unperceptive.

There are other downtown lots that also charge for parking but remain under-used. Shoppers like the convenience of free parking, lots of options, at the shopping centers and the mall. They don’t have to worry about a ticket after two hours. The shift in the parking pattern by the postal employees proves that there’s a need for more unrestricted feeless parking. People need convenient parking.

The city should think about free lots with no time limits as a way to draw more people downtown. Obviously not much income is being generated from the for-pay lots.

And as for the problem on Miller Street: why not limit parking to one side of the street? How about white-striping permitted parking areas and yellow X-ing out the ones where they cause problems with a driveway?

There’s a need for a proper balance between restricted and unrestricted parking.

Free-range works for growing healthy chickens. Downtown could use some free-range parking for a healthier economy. Give drivers more options. A bit of freedom.

On the corner of Cornelia and Lafayette street, someone parks their car wheels on the curb. It kind of irks me because they have a double garage. Then in the employees of Ace Electric, the next building, park their vans along the street on both sides. Furthermore they also park on the sidewalk. Lame for pedestrians whether one walks in the street or on the sidewalk.