Recently it was reported in the news that the Plattsburgh Police Department used a “nonlethal” sponge round to subdue someone during an armed standoff.

Sponge round? A term unfamiliar to me. Time for some Google research.

A sponge round is a projectile four inches in length, 1.6 inches (40 millimeters) in diameter, with a large foam rubber nose. Images of this projectile can be found on the Web. At first glance a sponge round looks like a big toy bullet, maybe ammo for a Nerf gun. 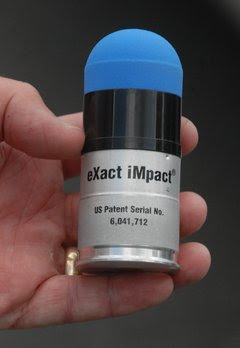 But it’s no toy. Fired from a grenade launcher, the projectile uses blunt impact to stun the target. Another invention in the search for the perfect nonlethal weapon, from rubber bullets to pepper spray to Tasers.

The preferred term is less-lethal weapon. While intended only to incapacitate the target, rubbers bullets and Tasers have proven to be deadly at times.

Nonlethal force (as opposed to deadly force) was to imply that a weapon wasn’t designed primarily to kill but that death could still occur in a few incidents. But nonlethal can be interpreted as meaning “never lethal.” “Less-than-lethal” or “less-lethal” are the terms used to indicate that sponge rounds and other such weapons can still be deadly. (A cynic could argue that euphemisms don’t make a device less deadly.)

At globalsecurity.org, a website that sells sponge rounds, there’s this statement:

“The M1006 [sponge round] is a direct fire, low hazard, and non-shrapnel producing projectile. It is to be understood by the operator that the potential of this cartridge causing lethal trauma does exist if incorrectly employed. (This fact must be constantly in the operators mind, that incorrect employment of the M1006 can cause lethal trauma.)”

The incident in Plattsburgh involved a distraught person armed with a knife. When dealing with someone with emotional problems, the police prefer to incapacitate with less-lethal weapons than use deadly force. Some argue that this can put an officer in danger. The less-lethal weapon might not be as effective as a gun. The target might be able to ward off the injury and then attack the officer.

Last year in Oregon the police confronted a violent man wielding a hammer. The man was hit six times by sponge rounds and still had to be Tasered.

After he was subdued, police noticed that one of his thumbs was missing, shot off by a sponge round. Apparently the projectile pinched his thumb against the hammer, severing it. (Better a thumb than some other appendage.)

At this time a Google search doesn’t reveal any reported fatalities associated with sponge rounds.