Sometimes I pause while reading, caught off guard by what is purported to be fact.

If you read the latest edition of Cheers And Jeers in the Press-Republican (3/2/09) the editor talks about an upcoming second visit by some homophobic clowns from Kansas. OK, I agree that maybe the best way to handle the next demonstration is just to ignore it. But then I encountered this statement by the editor:

When they came to Plattsburgh in 2006, their visit was a colossal flop. They elicited little if any reaction from the public, other than a peaceful, united "Stop Hate" campaign in opposition to their "God Hates Fags" diatribe. 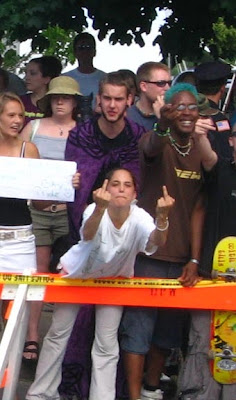 The above image is one of many I took during the 2006 visit to Plattsburgh by the Fred Phelps Circus. As you can see, emotions were riding high on the anti-Fred side. You’ll find more like it at my archive site, www.writog.com.

The Press-Republican also ran similar pictures taken by its photographers –- at least ones more family friendly. That’s the thing about being a reporter or photographer: you get out of the office and see what’s going on in the real world.

The PR editor should leave his climate-controlled bubble and rub elbows with the hoi polloi more often. Or at least pay attention to the images from his photogs that cross his desk.