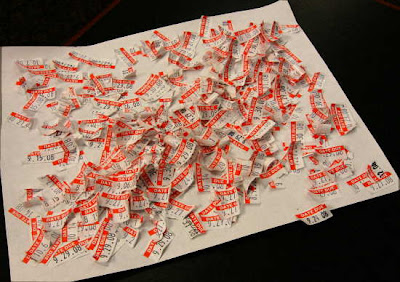 This pile of peeled off stickers at the end of the day shows how busy the Plattsburgh Public Library has been lately.

Books and other materials have been flying in and out. The library has seen a jump in usage, due in part to the bad economy, people trying to save money. But ironically the same bad economy might force cuts in the library’s budget.

I spent a lot of time at the public library back then. Out of work. No jobs to be found.

Over the years I’ve read many books free of charge, thanks to the library. One that sticks in my mind is Journey To Nowhere: The Saga of the New Underclass (1985) by writer Dale Maharidge and photographer Michael Williamson. Traveling across the country in those dark days of the Reagan recession, they documented in words and pictures how well the “trickle-down” economy was working.

The term trickle-down sounds more appropriate for a urinal, not the US economy. Most people don’t want to be trickled on – or tricked.

I haven't been in the library reading books for more than 10 years, and I'm sure of that.

Reading via internet has become my style, so it keeps my books away. But now I doubt such kind of reading. And maybe it's time back to the library.

Thanks for your comment all the way from China. I enjoy your blog, especially the photos of everyday scenes in your community.

Yes, there is a lot of doubtful material on the internet. But there is also lots of doubtful stuff in books or on TV or on the radio. Deceptive or incorrect ideas are not limited to the net. I try to be skeptical but not cynical. A skeptic questions, allowing that an idea might be true. A cynic rejects everything.