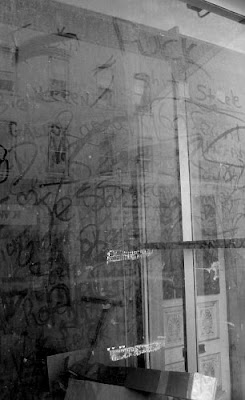 “You own that building?”

I was shooting an empty storefront on Clinton Street. Large window, years of neglect, a patina of grime. The gray film offered a medium for graffiti artists. Fingers pressed against the pane, they had etched witticisms reflecting their four letter mentalities.

I lowered my camera and turned my head. A stranger walked towards me, a white haired man around my age. At least he wasn’t hassling me; his tone only suggested curiosity.

I explained that I wasn’t the owner, that I was documenting the vandalism. I pointed at the recessed entranceway, mentioning how it was sometimes used as a trash can.

The man observed: “They also use it as an urinal.” He mentioned how ugly this storefront looked compared to most of the other buildings on the street. “I used to have a business here. This building is owned by an absentee landlord; he’s never around.”

A common problem. At one city council meeting I had attended there was talk about requiring an absentee landlord to have a local agent to respond to any complaints or handle any problems. A practical solution. So practical that it will take Plattsburgh a hundred years to get such a regulation in effect.

In the meantime decay eats away too many buildings. And the landlord writes off his property’s depreciation from his taxes. Rot pays better than repair.