Today there’s going to be a citywide cleanup, starting at 9 AM. I could upload so many images of problems around Plattsburgh that I would crash this blog service. But I’ll limit myself to three.

According to the newspaper article, rakes and bags will be provided. Well, as you can see from the image below taken yesterday on lower Cornelia Street, they better bring along some shovels. Pedestrians who didn’t paid attention pressed the bowwow brownies right into the sidewalk. 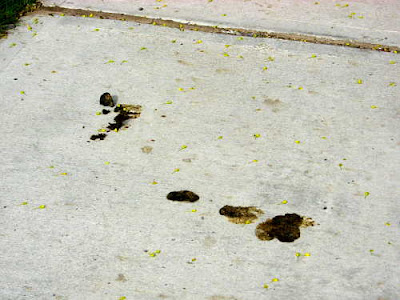 The article said it should take only two hours per ward. I think the Clinton Street area will take at least one hour. Besides shovels, a good hosing with bleach might be needed for these dog logs that have sat undisturbed among the broken glass for over two weeks on Clinton Street. 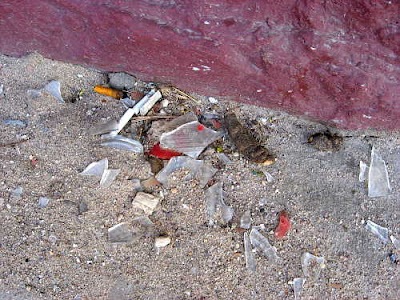 And it’ll be good to see this rusty razor blade finally removed from Clinton Street. It’s been lying around since winter. 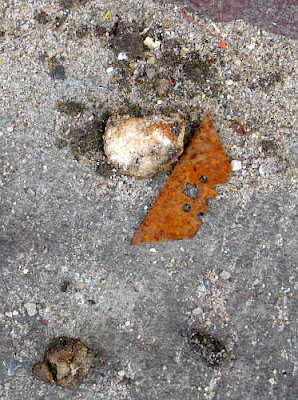 Good luck to City Councilor Amy Valentine and her volunteers. (But it does suck that they have to pick up after so many two-legged pigs on the loose.)

Will I participate? No. Why? Three reasons:

2. I spend enough time photographically documenting Plattsburgh’s slide into slumitis that I’m sick of looking at trash and litter (especially the canine cannelloni).

3. I’ve already “volunteered” in the past when I was trapped on workfare, serving out a sentence at the Plattsburgh Public Works Department. (Great use of my college education.) In the springtime us workfare slaves had to shovel up the streets, sand and litter. On occasion the full-time municipal employees told us to slow down. Apparently we were making them look bad, even though we were working for minimum wage.