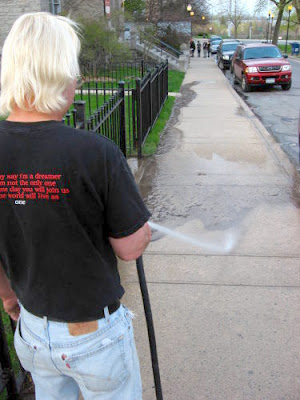 Lee had a problem. He helps with the upkeep of the Trinity Church property, including the sidewalks that border the lot. The sidewalks were filthy, covered with dirt and litter. How could he quickly and effectively clean up the crap?

Broom-sweeping the stuff would remove some - but not all – of the dirt. Also, a broom would spread dust all over.

So he got out a garden hose and swept the concrete clean. The water pressure created a mucky tsunami that he could herd out of the way. Problem solved. The sidewalk was almost as good as new.

So maybe Plattsburgh should use water to clean up its downtown. It could rent one of those planes used for fighting forest fires.

A good water-bombing would do wonders.