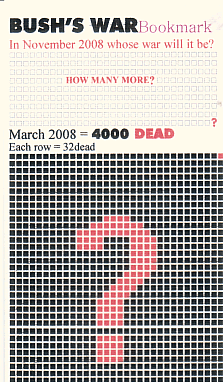 Months ago he gave up repeatedly hitting the wall while working his way through the frustrating maze of mainstream publishing. As a writer-artist, he wanted to express himself. Retired from the graphics field, he used his experience to set up a home-based printing operation to produce his own books.

DIY: do it yourself. To hell with the mainstream gatekeepers.

Pat is against the dead end war in Iraq. He used to join the Thursday gathering of anti-war demonstrators in Plattsburgh, the “bu$h Bash”/peace march sponsored by the North Country Democracy For America group. But now he can’t make the weekly commitment.

Another dead end? No, he wasn’t going to stop expressing his opinion. When a grim milestone was reached, he created a bookmark that vividly illustrated the 4000 total of American soldiers who have died in Iraq. The Bush’s War Bookmark is large, but form must follow function. Row after row of black squares, 32 dead in each row.

One key date noted on near the bottom is “Mission Accomplished,” the day the president declared major combat operations were over, way back on May 1, 2003. After that date there is an explosion of black squares. The lie is exposed.

Near the top of the black rows a red question mark is superimposed. How many more will have to needlessly die for the president’s mistake?

Some war hawks might complain that the bookmark trivializes the death of each soldier, reducing each life to a black square. From my POV the White House is guilty of trivialization, racking up the losses like so many bullets. Soldiers as expendable, government issued material.

The weekly peace march in Plattsburgh is held every Thursday, 4:00 – 5:00 PM, Trinity Park, City Hall Place side. For more information, check out http://www.ncdfa.org/ .