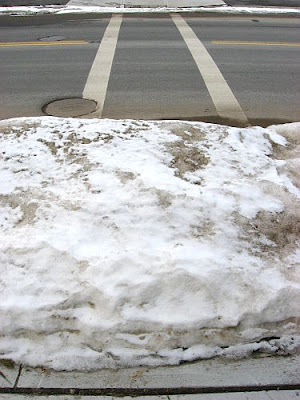 Why is this school crosswalk ramp on Margaret Street blocked by snow?

The business at this location has been keeping the sidewalk shoveled, just like everyone else on the street. But the sloping ramp that spans the median – the city’s responsibility – remains obstructed.

Earlier this winter I called the city and they cleared out the rampway. But public works or the school hasn’t bothered to maintain this spot. Could it be the city is itself a scofflaw when it comes to the snow removal ordinance? It uses the ordinance to make property owners shovel the sidewalks.

I’ve expended great thought considering this situation, mulling it over for hours. Maybe I’m being too critical, I thought. After all, the city couldn’t be that hypocritical or incompetent, could it?

Then it dawned at me: this problem was really a solution. Why would the City of Plattsburgh force schoolchildren to climb over a snowbank or walk around it to gain access to the sidewalk? Simple. Childhood obesity. The blocked crosswalk ramp forces to the kids to burn off more calories, especially when they dodge traffic in the street.

Once again, Plattsburgh demonstrates that it cares about the health of its citizens, especially the young ones.

Apparently Public Works dosen't take this responsibility seriously. And this reflects on management, right up to the top. Or, perhaps its too costly to have workers constantly clearing the ubiquitous crosswalks in the city.

Perhaps this job could be privitized -- local citizens, kids, businesses could be paid to keep nearby crosswalks clear.

Whatever the formula, there should be plenty of people willing to earn a little extra money. And all the city has to do is have an inspector drive around periodically to inspect the work.

An interesting proposal. But to make it work, the city has to do its own part. It should be maintaining its school crosswalks. Most citizens are willing to do their part; look at how many are shoveling sidewalks. But the city still has to lead by example. As of today, that crosswalk ramp is still blocked.