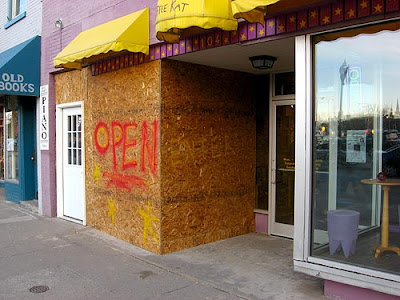 Did a “Mr. Waldron” cause a remodeling boom at the
Koffee Kat?

Who is Mr. Waldron?

The question arises with the final sentence of a Press-Republican article about a car accidentally backing into a downtown Plattsburgh coffee shop.

Only three people are mentioned by name in the article:

Wendell Castine – Driver of the car that smashed into the Koffee Kat building. He stated he didn’t know why his Cadillac suddenly took off when backing into a parking spot.

Emily Castine – Wife of Wendell Castine. She was waiting for her husband to pick her up from work.

Patty Waldron – Owner of the Koffee Kat. She stated that no one was hurt when the front windows shattered.

Just three names in a short straight news article. Should be easy to follow this cast of characters, eh?

But the last sentence in the article states: Plattsburgh City Police gave Mr. Waldron a ticket for unsafe backing.

So who’s Mr. Waldron? Patty Waldron’s husband? If that’s the case, then all the details previous to the last statement are incorrect. Apparently Mr. Waldron drove his wife’s coffee shop into Wendell Castine’s car. That’s why the police gave him a ticket for unsafe backing.

Or is Patty Waldron a transsexual who backed her shop into Castine’s Cadillac?

Update: Apparently the Press-Republican revised the article at a later time and changed “Mr. Waldron” to “Mr. Castine.” Here’s the corrected article, second page: Link 3 . And after I spent all this time discussing “Mr. Waldron.” But the original version is still up, so unless someone knows about the correction, “Mr. Waldron” is still taking the blame.

Oddly enough, I believe the husband of the owner goes by another last name and practices law down the street. Hint: he is not a Yankees fan.

Gee, that guy's name isn't Frank Zappa, is it? (Obviously I been reading the PR too much.)