Warm air has done more to clear sidewalks blocked by snow than the apparent hot air blowing from city hall. I give thanks to the January thaw.

Over two weeks ago I called the building inspector’s office and provided a short list of problem spots. The guy on the other end told me that it would be a while before appropriate action would be taken.

Last winter part of the sidewalk on Elm Street was a problem. Two storms and it was never shoveled – until I contacted the city. Then it was cleared.

This winter, same problem, but not the same result. Until recently the last half of Elm Street that runs into Miller has been blocked, lost to view. The property owners clear their driveways and walkways into their buildings but do nothing to shovel off the rest of the sidewalk. So far only warm temps have uncovered the concrete buried underneath.

At least the property owner on the other half of Elm has done his part. But it must be annoying to see the scofflaw next to him ignore the new law.

Or is the new law in effect? Maybe I missed the announcement, but I didn’t see any mention that the NY Department of State approved it.

Years ago mayor Dan Stewart was blowing hot air about hedges being cut back so that they wouldn’t obstruct the sidewalks. It was implied that the city was going to take appropriate action against property owners responsible for the untrimmed shrubbery.

But nothing happened. I found out from a reliable source that the city had no law at the time to enforce hedge trimming. The city was “bluffing.”

That causes one to wonder: is the city bluffing with unshoveled sidewalks?

But at least it could set an example and shovel out the school crosswalk on the east side of Margaret Street. Kids are still climbing over the snowbank so that they don’t have to walk in the street.

And, yes, I told the city about that problem over two weeks ago. 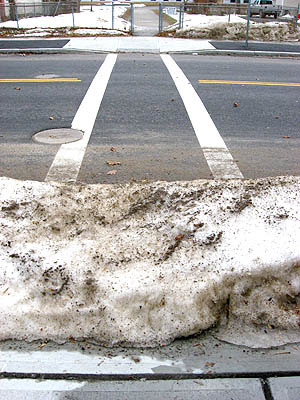 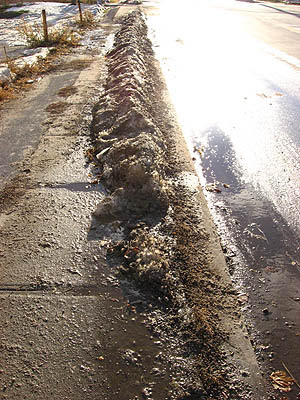 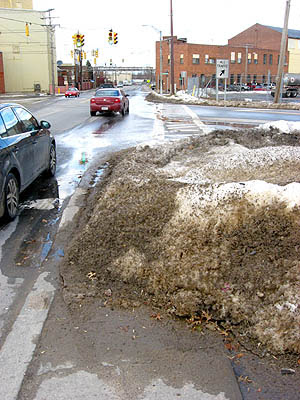