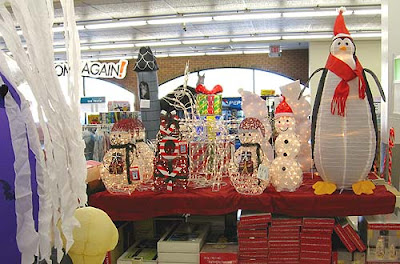 This image was taken on October 2nd, four weeks before Halloween. They’re already trying to get people into the materialistic feeding frenzy of the so-called holiday season.

It used to be the Xmas crap didn’t start up until after Thanksgiving. Now some stores have to beat out Halloween. If you notice in the image, you can see part of a Halloween display on the left side; it isn’t as prominently located as the Xmas lawn ornaments. It won’t be long before they start pumping holiday “music” through the PA systems. You won’t be able to escape the same sugary tunes ad nauseam.

And people wonder why I hate Xmas so much.


(Note to morons: No, I’m not Jewish. If you don’t like my anti-Xmas comments, move to the North Pole.)