Jesus. The name doesn’t really attract attention when walking by a church. But when it prominently appears in an unusual setting, you can’t help but notice. 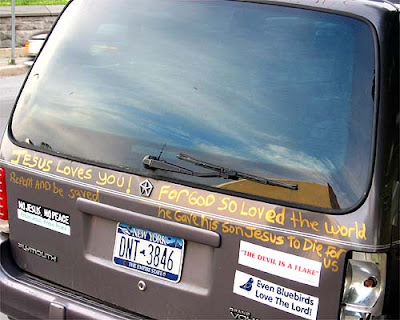 The parked gray van was adorned with messages painted with bright golden lettering. The owner was sitting in the front passenger seat, talking to a passerby who shared similar beliefs.

I asked the owner if it was OK to take some photographs. She agreed, seeing my interest as an opportunity to spread her message.

As I grabbed a few pixel pix, she told me that she bought the van for only $100. When I was imaging the hood, the self-proclaimed reverend asked me if I knew what the biblical quote meant, the one on the driver’s side. She explained that the quote from Revelations meant that all churches who received non-profit status from the federal government were under its control and therefore under the control of Satan. 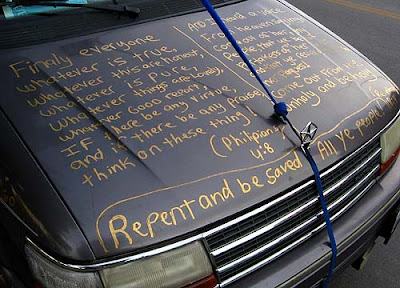 Apparently the Number of the Beast is 501(c).

Luke, in my most recent entry, is the lady holding the sign at the protest a couple of years back, the one who was driving the van?

I looked at your post and pix for the Fred Phelps circus. Could you be more specific, telling me which photo (second from the top, whatever) and a brief description of the woman in the image?

In your post you describe the event as "fun." When the protesters moved downtown after the church, it wasn't that much fun. If you're interested, I can give you a link to my coverage of the event at my website, writog.com . I have images of church group members stepping on and dragging the American flag. The shouting between the two sides became heated.

Luke, it was the older woman with the white board looking thing written on in marker....I'll check your site out....I only saw just where I was and I'm sure it was pretty contentious elsewhere but where I saw, there was some laughter and good natured barbs..

Warning! My website, writog.com, is a rambling mess. I just kept changing and adding things without making it that easy to navigate. Below is the direct link to the section dealing with the Fred Phelps Circus:

You can copy and paste it to get there. If that doesn’t work, try this:

As you can see, you need a roadmap to get around on my site.

When I get a chance I'll go back to your blog and see if it's the same woman.

OK, I checked your photos again. Do you mean the lady in image #1 and #5, the one with the blue cap and pink shirt? Part of her sign reads: “America the rainbow…” The woman in the van didn’t look like her.

Have you met the woman I talk about in my post? I really didn’t get a good look at her because I was concentrating on getting my images, but I remember enough about her features to say the older lady in your post isn’t the same one.

Apparently my link doesn't fit properly with my blog's format. Anyway, here it is to fit the column width:

Luke, yep that's her the one with "America the rainbow..." all one sentance LOL!
I saw your shots too. You saw more than I did! It was a fun day to go photographing!