Scooting Scooters Off The Sidewalks 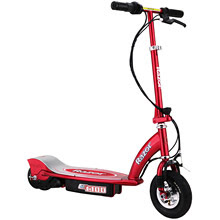 Remember the old-fashioned foot scooter? It’s called nowadays a push or kick scooter. One leg provides the main power: the rider induces motion from his foot pushing away, again and again, on the ground. He can build up a good amount of coasting speed, especially with an incline.

Well, that wasn’t dangerous enough for pedestrians on the sidewalks. Now there are electric-powered scooters that use the same basic design, but let the rider save his leg. Top speed for these scooters ranges from 9 to 20 MPH. Imagine a big person going zipping down a sidewalk. Even a kid on one could hurt an older person if there’s a collision.

Despite the snowy, narrow sidewalks, I had to make way the other evening for a woman on one of these motorized menaces. Her scooter was black; no lights. She held a bag of groceries in one arm while the other had to steer her scooter, keeping it under control.

Below is an email I sent to the mayor. I realize that with the budget crisis facing Plattsburgh, electric scooters on sidewalks doesn’t rank that high in priority. But it is a problem.

Why are pedestrians given such second-class status in Plattsburgh? Even when I obey the law, using a street crosswalk, I end up almost being hit by an inattentive driver. Now I have to tolerate bad motorists on a sidewalk? I don’t think so.

After all, it’s called a sideWALK, not a scooter path.

Thank you for your prompt reply in regards to the problem of sidewalks not being shoveled after a snowfall. From what I read in the Press Republican, I had the impression that something would be done this winter about the situation.

I want to raise another matter related to the sidewalks. This evening I was walking down a sidewalk and someone came up behind me on a motorized scooter. I didn't hear the person until they said something and passed by me. I noticed there were no lights on the scooter. This is my second "close encounter" with one of these scooters. My other encounter involved someone zipping down the sidewalk almost at full speed. Someone is going to get hurt.

Why should I as a pedestrian yield the right of way to one of them? Shouldn't they be on the street? There must be an ordinance against this type of vehicle on a sidewalk. And after spring arrives, this problem will only become worse.