Political Analysis By Plattsy The Clown

OK, no one wanted me as mayor of Plattsburgh. You voted for someone else. Hopefully you chose the right tool for the job. And considering the others tools who have run this city, maybe your decision was the best one.

But at least this blog recognizes my political genius and has hired me to provide incisive insight into local governmental activities, hammering away with my Clown Hammer of Truth.

So did the gang at Plattsburgh’s City Hall have a fun holiday season? I doubt it. The city is facing a financial crisis, drowning in red ink. Taxes are going up again, a double digit hit. To borrow a line from Jimmy Carter, a great malaise hangs over this city. Actually, it’s more like a great miasma, but this time it ain’t from the sewage treatment plant.

It’s been stated that Hollywood is high school with money. Well, Plattsburgh is like that but on a different level: it’s kindergarten with money.

I mean, how childish can some people act? There has been an accusation that the mayor-elect has a spy in city hall, providing classified data to the press. This top-secret data is the salaries of the municipal department heads – you know, what is called public information. The chief fiscal officer dealing with the books says there is a plant in her office; she alleges that this other city employee has been listening in on her phone conversations. (Hey, lady, why don’t ya get a scrambler system on your line?)

You know, the only leaks city hall should be concerned about are with its toilets.

Meanwhile, the head of human resources is suing the city, saying that his position was cut down to part time because he filed a sexual discrimination complaint on behalf of another employee. He’s hired some a big gun lawyer who works for a monster firm, Godzilla, Kong, Gamera and Bambi, whatever its name is.

And let’s not forget another important component of the City Hall Gang, the Common Council. At one council meeting a citizen stated that she would rather vote for a little brown dog than any of the councilors now in office.

So because of the city’s financial fiasco, you’ll see some fresh faces on the council after the next election. They’ll be furry. The trouble is, the new councilors could be bribed with treats. But least they won’t leave large elephantine messes behind like their predecessors.

The circus that is Plattsburgh will go on.
Posted by Luke T. Bush at 10:30 PM No comments: Links to this post

Feeding (And Fooling) The Pigeons

The City of Plattsburgh has made sure the pigeons will be well-fed this winter.

As detailed in a previous post, the city hired a construction company to renovate the streets. During this renovation the lawn between the curb and the sidewalk was ripped up and carted away, leaving a shallow trench. Instead of placing sod strips down, the construction workers filled in the medians with soft soil that turns into muck during wet weather.

When the new soil was added, the workers rolled it down and added grass seed. The other day I noticed a flock of pigeons pecking away at a section of the median. I don’t think they were feeding on the soil. So whenever the grass seed does take hold, it’s going to look sparse.

Of course, the pigeons will be fat and happy thanks to another type of pigeon: the taxpayer.
Posted by Luke T. Bush at 12:56 PM No comments: Links to this post

Are there two different individuals named Michael Kulik who reside in Plattsburgh, NY?

The reason why I ask this question is that I’ve spotted that particular name in the local daily newspaper on a few occasions. In regards to an income-restricted housing project in downtown Plattsburgh, a Mike Kulik supports the decision, criticizing anyone who opposes the mayor’s favorable vote.

At the same time there’s a Michael Kulik who doesn’t want an apartment house built near his neighborhood, an area secluded from downtown.

The proposed low-to-middle-income housing for downtown is referred to as The Bove Project. It would be built on a convenient, centrally-located parking lot. Some critics of the Bove project say they have nothing against low-income working families, but they feel the spot should remain set aside for parking. The pro-Bove crowd feel that these critics are just confusing the issue, that some people are prejudiced against people with limited incomes.

“This whole thing isn't about a crummy parking lot being replaced by attractive, affordable housing for low- to middle-income families. It's all about the law of the jungle or, at least, the law of the street gang.

In the movie West Side Story the ‘Jets’ had a piece of the block they didn't want to share with the Puerto Ricans. Well, that parking lot at the corner of Margaret and Court was the tiny piece of the block that our own gang of businessmen wanted to control until they decided what to do with it, if anything.”

Meanwhile, a Michael Kulik who lives in the Hamilton Street area is opposed to an apartment complex being proposed near his home. In a newspaper article (Press Republican – Oct. 12, 2006) his letter to the city zoning board was discussed. He and his co-writer, Jennifer Colver, said the development appeared to be “a slum in the making.” This project is being promoted by developer James Latinville.

In his letter Kulik also stated: “[Mr. Latinville’s] apartment houses have driveway paving right up to the doorsteps and porches, little green space considering the number of residents, no outdoor storage, no screening for privacy and poor drainage in places… These shoddy apartment buildings undermine the value of the single-family houses the developer has sold nearby."

Assuming there is only one Michael Kulik (the phonebook lists only one), there is a common solution to the problems being caused by the Bove and Latinville projects.

Cancel the Latinville project and move the Bove development over to Kulik’s neighborhood. After all, Kulik doesn’t think the Bove project is a slum, unlike Latinville’s apartments. And since he is an advocate of low-to-middle-income families, Kulik can’t be accused of NIMBY (Not In My Back Yard).

And if there’s two different Michael Kuliks, I think they should get together and debate the merits of my solution.
Posted by Luke T. Bush at 6:16 AM No comments: Links to this post

One of my previous posts dealt with a local woman using her car as a message board. Someone decided to share their viewpoint and left a comment.

I like well-reasoned opinions. Then there are ones such as the following:

Stable Person said...
You and her are BOTH CRAZY!!! How's welfare....Plattsburgh is the capital!! Jackass!!

Such a statement evinces astute acumen.

I tried to envision what sort of individual lurked behind the pseudonym, "Stable Person." At first I thought "Stable" referred to his mental state.

But then I noticed that he thinks the word "jackass" is a compliment. The answer was obvious. The commenter was born in a barn and lived in a stable. How appropriate for such a half-witted animal. 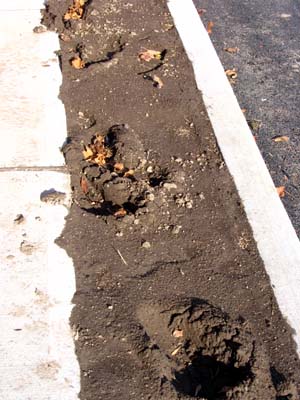 Like quicksand? Well, there’s plenty of it within the medians between the new sidewalks and the streets.

During the construction the old lawns were torn up and carried away. Then the resulting trenches will filled in with some new dirt. The other day some guys were rolling down the fresh soil, then sprinkling grass seed. But then it rained – a lot. Instant mud flats.

Usually after the street and sidewalk rehab is done, squares of grassy sod are put down. With thick sod you don’t have people’s feet sinking up to their ankles.

OK, maybe it’s too late in the season to put down sod. But any construction company should know that here in the North Country, you should have your lawn work wrapped up by the end of September or forget it. It’s obvious the crews were running behind schedule; they were paving the streets Halloween night.

So the answer is to try to get the job done on time or use a better type of soil. At least put up some sticks and orange ribbons to warn people that the new surface hasn’t taken yet, especially at night when the mud looks solid, safe to walk on. 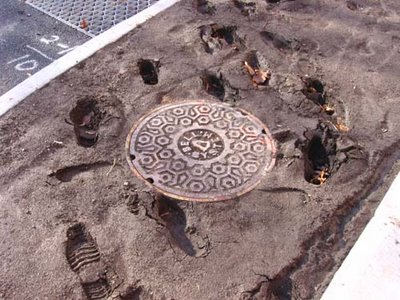 I hate to see what could happen if someone breaks an ankle. But lawsuits do make The Powers That Be wake up and pay attention.

Actually, The Powers would be better off correcting a situation before getting stuck in a legal quagmire. Will they ever learn that a muckraker like me provides an invaluable service to the community? Instead, they remain muddleheaded.

Me, I remain standing on terra firma. At least I try to…