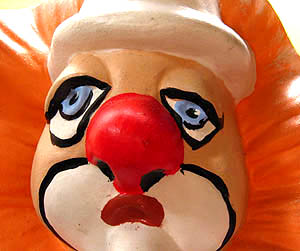 No, I’m not referring to one of my opponents in the Plattsburgh mayoral race. I’m talking about me, why I’m the best candidate to lead the ‘Burgh. My qualities are Plattsburgh’s qualities.

One of my opponents declares: Performance. Not Promises. Well, I can top that: Promises AND Performances. No one can spin as many plates on long slender poles than yours truly. In fact, in clown college I stated in my doctoral thesis that German dishes were the best for spinning. That earthshaking concept has become known as Plattsy’s Theory of Plate Teutonics, if you get my drift.

And I won’t be just making plates spin. Imagine the reaction by previous Plattsburgh mayors who are no longer among the living. If elected I’ll be making the dead spin in their graves!

So remember me tomorrow at the polls. My motto: Plattsburgh’s A Circus: Elect A Clown!