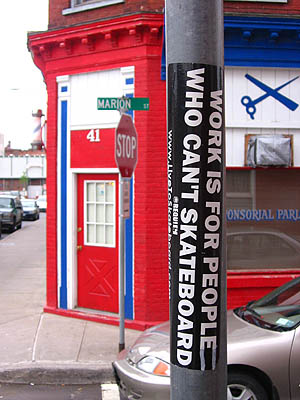 It’s against the law to adhere a bumper sticker to city property such as a one-way sign. Apparently skateboarders are given special permission; after all, they have to mark their territory. 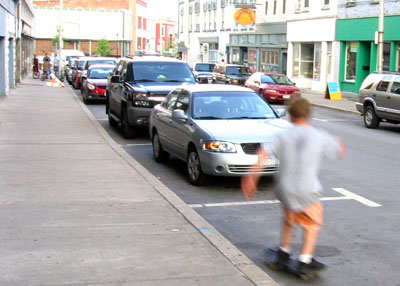 Notice in the above picture that the cars on both sides of the street are facing towards the camera. Notice how the skateboarder is speeding away from the camera, just about to jump on the sidewalk. Sidewalks, so says the law, are intended for pedestrians. 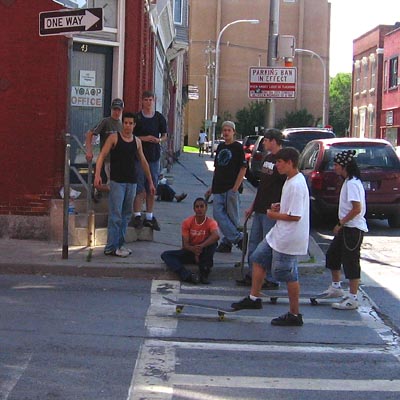 Now take a look at this second picture. See how the skateboarders have lined up on the crosswalk, ready to take off down the street? Crosswalks shouldn’t be blocked; they’re intended for pedestrians. Also note the one-way sign, the direction if its arrow. See which way the skateboarders are facing? 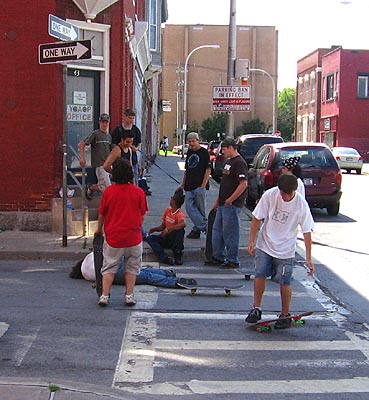 It seems that one of them had a tumble –- without wearing a helmet. Then again, some people don’t need protective helmets because they don’t have to be concerned about brain damage. (If you don’t have one, then don’t worry about damage.) At least he wasn’t hit by a car. Some of these guys like to zip out from the side streets without looking. Maybe one day a skater will suddenly encounter a police car –- the hard way. Then again, if the police are never around, then don’t worry about being struck by one of their cars.

One day the law will take action. I will be photographing the scofflaws on their skateboards. And once again the police will stop and ask me: “What are you doing with that camera?”