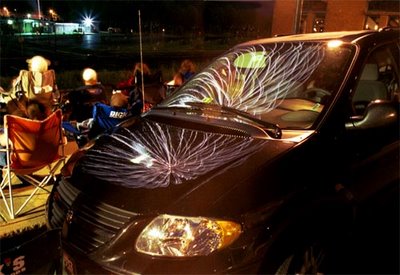 I looked at my watch. 9:30 PM. The fireworks were starting right on time. I hadn’t counted on that. Usually the pyrotechnics were fifteen, twenty minutes late.

With camera bag slung over shoulder, I grabbed my tripod and my half-drunk cup of coffee, leaving the café. I made my way through the crowded streets, sipping my hot brew, quickly seeking a spot where I could set up and shoot. Out of nowhere: a city cop on a bicycle, shooting by me, a silent meteor. On his way to a fight down the street.

As I maneuvered down the sidewalk towards the lake, I noticed an angry woman across the street in handcuffs, yelling, surrounded by police officers. There’s something about the 4th of July that brings out the best in certain people.

I threaded my way across the bridge, sky-watchers lined up, no clear view. Eventually I went with a spot near the old railroad station; I estimated that the fireworks were now half over.

I set my tripod up near the curb, away from the others. I was using my SLR film camera; my compact digital doesn’t reproduce the color bursts that well. Using the widest setting on my zoom lens, I decided to include the crowd in the shot, the display exploding over the head lines. I preferred be closer to the action, almost under it, but this would have to do.

Manual exposure. The best way to nail the shot. But unlike a digital, I wouldn’t be getting any feedback on a LCD viewfinder to see if I had the right settings. I had to use experience, remembering how this film camera worked under low light conditions.

A few back-of-head shots, people looking up at the bursts. A few shots of fireworks only. OK, not bad, but I was still disappointed with my view.

Then I noticed a van parked near me. Reflections. I backed up a few feet and with the wide angle setting focused on the van’s hood and windshield. Maybe this otherwise mediocre spot could work to my advantage, giving me a different POV. But I would have to wait until I had the film processed, scanned, and then burned onto a CD to see if my risk paid off.

Today I came home from the one hour lab, popped the CD into my computer, and was surprised that my experiment worked. An intriguing view of the event overlooked by others. As it turns out, it was OK that the fireworks started on time and I wasn’t ready. 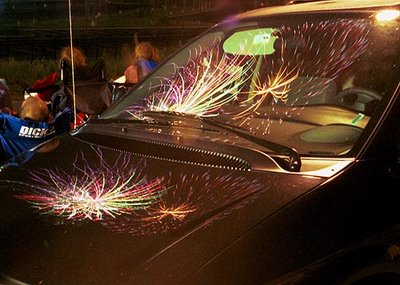