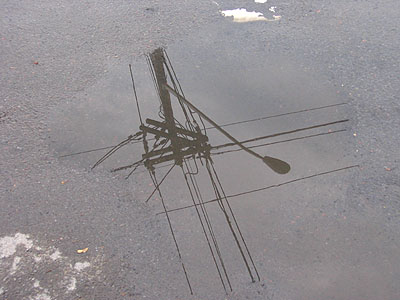 If you aim your camera straight ahead or up into the sky, most people don’t question your activity. But when you take a shot of something right at your feet or low to the ground, people wonder what you’re up to.

Being stuck in the same place, day after day, makes me seek out new subjects, developing an eye for the unusual. Or maybe the strict limitation of one visual territory has made me so desperate that I’m going over the edge (mentally, not creatively). Either way, puddles have caught my eye.

Sometimes a puddle acts like a peephole into another world. On other occasions a puddle is a small mirror isolating an intriguing aspect of the greater world outside the confines of its jagged surface. There’s the juxtaposition of the sky being seen on the ground, above cutting into below.

A puddle becomes photographic when the details or patterns in its reflection produce an individual character. It’s as if the puddle has its own personality. (Or maybe not. It could be I’m just going nutso and need a vacation.)

Yesterday evening I was walking towards downtown, checking the puddles near the curb. Even though it had stopped raining, the sky was still overcast, soft gray clouds, unsettled conditions. When a reflection grabbed my attention, I would stop and shoot. At this point in my life, I don’t care if someone driving by doubts my sanity when I image a rainwater patch in the gutter.

Someone across the street –- a guy apparently with his traveling gear strapped to his back, sleeping bag, et al. –- noticed me photographing a puddle. I got a vibe from him; maybe he thought I was taking his photograph and he was upset. He walked towards me. He stopped in the street, a few feet away, talking distance. Gripping his long walking stick, he said to me:

“They killed the Super Mario Brothers. What are you going to do since they killed your director?”

At first I said nothing, just shrugged my shoulders.

He repeated himself: “What are you going to do since they killed your director?”

“I don’t know,” I said. I noticed that he was a little too far into the street; a car passed around him. “You know, you better watch out for traffic.”

I turned and kept walking.

“But what are you going to do since they killed your director?”

I wondered where the poor guy came from. Maybe he popped out of a puddle.
Posted by Luke T. Bush at 3:02 AM